Researchers use copper ions to enhance performance of Mg battery

Now, researchers at the Qingdao Institute of Bioenergy and Bioprocess Technology (QIBEBT) of the Chinese Academy of Sciences (CAS) report coming a step closer to making a viable, high-output Mg battery by using copper ions as a charge carrier. The researchers published their findings in Angewandte Chemie. 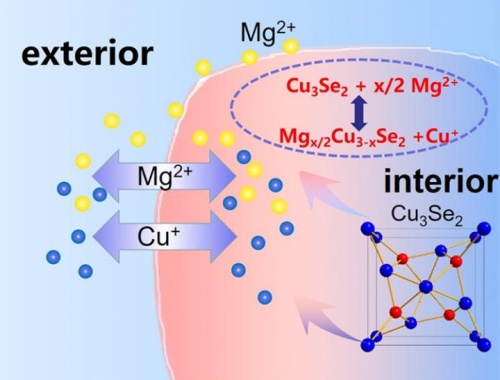 Due to the high charge density of Mg2+ , the diffusion of Mg2+ in the host material lattice is sluggish and/or the bonds between Mg2+ and anion are difficult to break during charge process, leading to large polarization and poor cycling performance.

A promising strategy to address these issue is employing another charge carrier for cathode chemistry. … In this contribution, we discovered a highly reversible magnesiation mediated by a charge carrier of cuprous (Cu+). Significantly different from the aforementioned charge carriers, the Cu+ originates from a cathode of Cu3Se2 rather than the electrolyte , which can avoid the loss of pack density. The Cu+ will dissolve into the boron-centered anion-based Mg-ion (BCM) electrolyte as long as immersing the cathode material into the electrolyte.

The concentration of Cu+ charge carrier in solution is governed by a fast equilibrium between electrode and BCM electrolyte. The high mobility of Cu+ around the sublattice of Se has been demonstrated in Cu2-xSe, and the Cu/Cu+ redox in solid state has been intensively studied before the era of lithium batteries. However, the presence of stable Cu+ in liquid solution for a Mg battery system has not been reported up to date.

As the Mg battery discharges, Cu+ dissolves into electrolyte, exchanges with the Mg2+ chemically, and becomes metallic copper as it receives electrons and forms a coating on the electrode. Since copper is highly conductive, electricity flows freely, allowing for high energy output.

Prof. CUI Guanglei said his team's Mg battery is not yet commercially viable, but it is on track to compete with lithium battery. We expect to achieve the 1,000-cycle milestone in the next two years, he said.

The day-to-day price of magnesium averages about $5,000 USD per ton—about half the cost of lithium. Beyond being cheaper, magnesium-based batteries would also be safer. Poorly made lithium batteries can overheat and explode, creating a liability for industries ranging from telecom to aerospace.

Prof. CUI said the next step toward making Cu+/Mg batteries a commercial reality will be to design it as a flexible pouch. To do so, they’ll need to create a gel form of their Cu+ electrolyte solution.