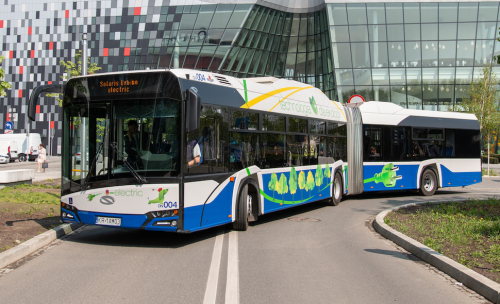 The order covers the delivery of 50 articulated electric buses as well as 50 plug-in charging devices, suitable for each of the new buses. The vehicles are to be supplied to Cracow within a year from the contract signing. The contract value amounts to PLN 165,435,000 (US$40 million).

The electric buses supplied to Cracow by Solaris will be propelled by electric axes with integrated electric motors. The design of the articulated buses will be adapted to two recharging modes: by means of a 4-pole roof-mounted pantograph placed above the first vehicle axis; or using a plug-in charger. Energy will be stored in high density Solaris High Energy+ batteries.

The electric articulated buses will be able to carry 141 passengers at a time, of whom 43 will be able to travel seated. The latest buses for Cracow will feature a monitoring system, a passenger information system, air-conditioning, USB charging ports and an electric heating system. Wheelchair-bound persons will be able to take advantage of platforms facilitating boarding and alighting of the bus. The ramps will be installed at the second door.

The purchase of 50 articulated electric buses for Cracow has made it onto the list of projects selected for European Union subsidizing, to the amount of €110 million PLN (US$27 million).

So this is an opportunity for us, by involving relatively small own funds, to obtain zero-emission buses for the residents of Cracow.

Ye gods.  That thing goes over half of the opposite-direction lane while taking a curve.  A vehicle that is inherently unable to obey traffic laws has no place on public roads.