BMW announced the updated, 2021 7th generation 5 Series Sedan. The MY2021 models feature improvements in exterior and interior design, aerodynamics and technology, plus the introduction of a new 48-volt mild hybrid system and a new plug-in hybrid drivetrain. The 2021 BMW 5 Series lineup includes the: 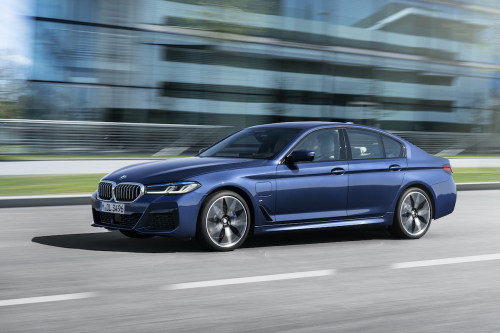 A 48V starter-generator and a second battery greatly increases the ways in which Brake Energy Regeneration can be utilized. When the driver releases the accelerator, the generator transforms the kinetic energy into electricity to be stored in the 48V battery.

Energy recuperation benefits even more when the Driving Experience Control switch is set to SPORT mode. The additional deceleration generated over and above the engine braking effect is also harnessed when the brakes are applied.

A specially designed braking system previously found in BMW’s plug-in-hybrid models enables the combination of electrical and mechanical deceleration to be deployed as required and with maximum efficiency at all times.

The recuperated energy accumulating in the 48V battery is supplied to the 12V electrical system and powers the lights, steering, power windows, ventilation, audio system and seat heating. In addition, the stored energy can be used to provide additional drive power when it is fed back to the 48V starter-generator.

The starter-generator then acts likes an electric drive unit that assists the engine, allowing it to operate within a more efficient range as frequently as possible and ensuring there are fewer peaks in fuel consumption. When the car is accelerating, the 48V starter-generator is able to offer the driver an electric boost effect that can instantly put an extra 11 hp on tap for more dynamic power delivery. The result is a sharper response off the line and quicker bursts of speed when accelerating.

A special feature of the mild hybrid system is the ability to charge the 48V battery from the generator while driving at a constant speed. This method of generating electricity by raising the engine’s load point is only employed when the battery charge is low and during phases when it does not have a detrimental effect on engine efficiency. 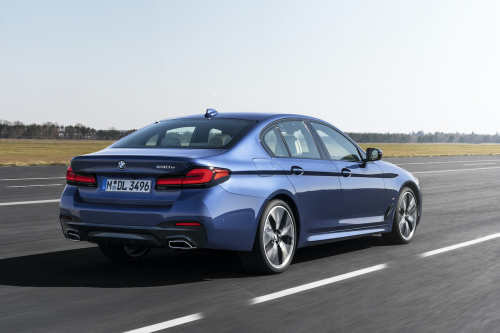 The 48V starter-generator has the additional benefit of allowing the engine to be switched off and started again very swiftly with less vibration. The result is improved comfort when the Auto Start Stop and coasting functions are in use. When the driver brakes for a stop, the engine can be switched off as soon as the car’s speed drops below 9 mph. And if the coasting function is activated, the engine is also completely shut off rather than just being decoupled from the drivetrain. This function is now operational at speeds between 16 – 99 mph and, on the new BMW 5 Series, it is available not just in ECO Pro mode but also COMFORT mode.

When the Driving Control switch and transmission are set to SPORT, a new XtraBoost feature offers an additional 40 hp for up to 10 seconds when the throttle is depressed to the kickdown position. The combined power and torque of the new 530e and 530e xDrive Sedans is 288 hp and 310 ft-lbs (420 N·m) of torque, an increase of 40 hp over previous 530e models.

The 530e Sedans also feature Acoustic Protection for Pedestrians, which uses an exterior speaker system to generate an unmistakable sound created specifically for electrified BMWs operating in electric-only mode at speeds up to 19 mph.

Intelligent connectivity enables the 8-speed automatic transmission to adapt its shift strategy according to the route and driving situation. Working with the standard navigation system, the 8-speed Steptronic transmission uses data from this system and from the optional Active Cruise Control system’s radar sensor. This makes it possible for the transmission to avoid unnecessary gear changes when negotiating a series of fast corners and, when approaching a vehicle ahead for example, to shift down early in order to use the engine braking to scrub off speed.

Optional on the new 5 Series is the Driving Assistance Plus Package which adds Active Cruise Control with Stop & Go; Extended Traffic Jam Assist for limited access highways—a Level 2 autonomous assist system which helps to reduce fatigue in stop and go freeway traffic by allowing for extended hands free vehicle operation; Lane Keeping Assistant with side collision avoidance; Evasion Aid; Front Cross-Traffic Alert; and Emergency Stop Assistant – —which can help guide your BMW to the shoulder and bring it to a halt in a medical emergency situation.

As part of the standard Live Cockpit Professional, the Navigation system is enhanced with 3D visualizations of the surrounding area, depicting all of the cars, trucks and motorcycles registered by the cameras and sensors in the driver’s current lane as well as those in any adjacent lanes. They are shown in the central section of the instrument display. Vehicles within a critical distance are highlighted.

Graphics indicate maneuvers which can be carried out with the help of the assistance systems. This ensures the driver has an overview of the situation and relevant courses of action at all times. If route guidance is activated, the screen also shows a panel with navigation instructions above the 3D view.

The Navigation has also been improved with a new digital cloud-based feature called BMW Maps. The benefits are faster route calculations and dynamic recalculation based on precise real-time traffic data. The route is worked out using an anticipatory approach, meaning upcoming traffic along the entire route is factored into the calculation of the expected arrival time. Complete traffic data is now available for more minor roads, too.

Hazard warnings transmitted online from the BMW fleet now reach the car even faster thanks to connected navigation. These improvements help to produce a very accurate estimate of arrival time and improved route guidance. The destination input function has also been improved and now lets the driver enter any word. Alternatively, the destination can be entered at any time simply by voice control. Plus, points of interest (POIs) along the route are described in greater detail, with reviews, opening times and photos.

The optional Parking Assistance Package includes a panorama view and 3D surround camera views to assist with parking. The system helps identify suitable parallel and perpendicular parking spots and can guide your 5 Series into and out of your selected spot. The included Back-Up Assistant records the last 50 yards driven at speeds below 20 mph and can automatically reverse your 5 Series along the exact path take to help navigate narrow or winding driveways for example.

The Remote 3D View function gives drivers the ability to call up a three-dimensional live image of their parked vehicle and its immediate vicinity on their smartphone. The Drive Recorder, a new feature to the BMW 5 Series, uses the cameras of the various driver assistance systems to record video footage from different points around the vehicle, before storing the recordings so they can be either watched later on the Control Display when the car is stationary or exported via the USB port.

The new 2021 BMW 5 Series Sedan also offers the latest version of BMW’s Intelligent Personal Assistant to help interact with your car in a more natural way. Activated by a spoken prompt, such as “Hey BMW” or at the touch of a button, this digital companion learns the way you communicate to provide better and more accurate responses. Naturally spoken instructions can now also be used to open and close the car’s windows (partially or fully) or adjust the air conditioning. In addition, the driver can set rules by which the BMW Intelligent Personal Assistant learns routines that increase convenience in specific situations. For example, the driver’s window could be opened automatically when the vehicle reaches a chosen location entered using GPS coordinates, such as the entrance to a garage.