Hydrogen researchers at Graz University of Technology (Austria), together with the Graz-based start-up Rouge H2 Engineering, have developed a cost-effective process for the decentralized production of high-purity hydrogen using chemical looping.

Currently, hydrogen is mainly produced centrally from fossil resources and compressed or liquefied in an expensive and energy-intensive process in order to be able to supply it to filling stations. Additionally, expensive infrastructure with high investment costs is needed there to store large quantities of hydrogen.

The process is well established and economically efficient due to the moderate costs for production, the feedstock and the existing infrastructure. However, centralized large-scale production implies the major drawback of emitting vast amounts of greenhouse gases during the transport over wide distances to the consumer using trucks. Additionally, large amounts of hydrogen have to be stored in pressurized form on site at the customer to compensate for fluctuations in consumption. Both the transportation and the storage contribute considerably to the hydrogen price.

… Decentralized chemical looping hydrogen production out of bio resources like biogas or gasified biomass in contrast has the potential for the efficient on-site hydrogen supply for stationary or mobility applications. The chemical looping concept generally utilizes chemical intermediates, often metal oxides to oxidize fuels and regenerate the intermediate in a separate reaction.

Chemical looping combustion (CLC) uses the lattice oxygen of metal oxide based oxygen carriers to fully oxidize of a fuel for thermal utilization and thereby enables the possibility for efficient carbon dioxide capture. Chemical looping partial oxidation (CLPO) is used to gain a synthesis gas rich in CO and H2 via partially oxidizing a hydrocarbon feed in contrast to CLC. The CLPO concept was successfully used in renewable energy systems for the production of CO and H2 via thermochemical splitting of CO2 and H2O.

Chemical looping water splitting (CLWS) or chemical looping hydrogen (CLH) recently got high attention in the scientific community due to the possible use of renewable energy sources as well as the inherent possibility for carbon dioxide capture. The innovative reformer steam-iron cycle (RESC), developed at TU Graz, enables the production, purification and storage of pure pressurized hydrogen with efficiencies of up to 75%. Renewable fuels like biogas, gasified biomass, or bio-alcohols can be used to generate green hydrogen on demand directly at the place of consumption. The technology makes it possible to produce high purity hydrogen in one compact unit without a complex gas purification step.

The Fuel Cells and Hydrogen Systems Working Group at TU Graz’s Institute of Chemical Engineering and Environmental Technology has been looking for ways to make hydrogen production more attractive. As part of the HyStORM (Hydrogen Storage via Oxidation and Reduction of Metals) research project, the team led by working group head Viktor Hacker developed a chemical-looping hydrogen method for decentralized and climate-neutral hydrogen production.

The research resulted in a compact and space-saving on-site, on-demand (OSOD) system for filling stations and energy plants and is being developed and distributed by the Graz-based start-up Rouge H2 Engineering. 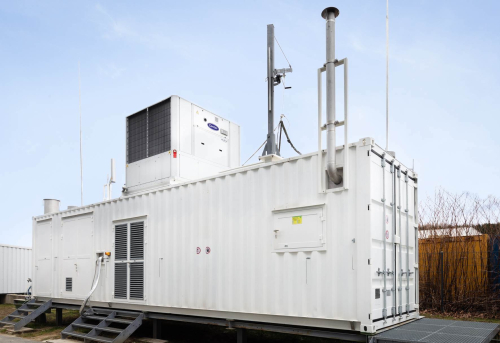 A prototype of the OSOD H2 generator is currently being tested on the premises of PDC Verfahrenstechnische Entwicklungsgesellschaft m.b.H. in Raaba-Grambach, Styria. © RGH2

The OSOD system is a hydrogen generator with integrated storage device in one system. Hydrogen is produced by converting biogas, biomass or natural gas into a syngas. The provided energy is then stored by means of a redox process (reduction-oxidation process) in a metal oxide, which can be stored and transported without any losses or safety risks. 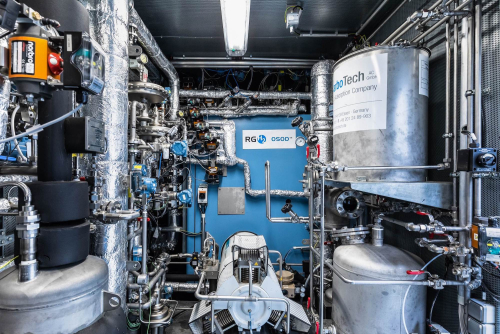 OSOD H2 generator. The blue cuboid is the core development: a gas furnace with four tubular reactors in which the chemical looping process for hydrogen production takes place. © RGH2

The subsequent demand-oriented production of hydrogen is achieved by feeding water into the system. The iron-based material is charged with steam and high-purity hydrogen is released.

This process also makes the system interesting for smaller applications.

Current conventional processes for hydrogen production from biogas or gasified biomass require complex and cost-intensive gas purification processes such as pressure swing adsorption—a separation process in which hydrogen is isolated from the gas mixture in several steps. This works very well on a large scale, but is poorly scalable to smaller, decentralized systems. However, our process generates only high-purity hydrogen through the steam-based redox cycle anyway, so there is no need for any gas purification step at all.

For this reason, the OSOD system is freely scalable and is particularly suitable for decentralized applications with low feed-in rates in laboratories and smaller industrial systems as well as larger decentralized units such as hydrogen filling stations or hydrogen production from biogas.

In addition to the provision of high purity hydrogen, Gernot Voitic, lead project manager of R&D at Rouge H2 Engineering, points out that the OSOD system can switch to standby mode in the case of low demand and resume hydrogen production at any time if required.

This on-demand release and integrated storage is the USP of the OSOD H2 Generator, and sets it apart from other similar products.

Rouge H2 Engineering and TU Graz researchers are already focusing on the next step. At present, the system is still operated on an industrial scale with natural gas. The working group now wants to make it usable for biogas, biomass and other regionally available raw materials. Biogas plants, for example, could thus become even more competitive in the future and, instead of electricity, also produce green hydrogen, which could be used for sustainable mobility concepts.

The HyStORM research project is anchored in the Field of Expertise “Mobility & Production” at TU Graz, one of the five strategic research foci of the university.

Put in the whole quote.

"Hydrogen is produced by converting biogas, biomass or natural gas into a syngas."

"At present, the system is still operated on an industrial scale with natural gas."

If you have a source of biogas, why not just that for your energy needs? Seems like it would be a lot simpler and less expensive.

Roger, precisely WHO is sequestering those CO2 waste streams?  Is ANYONE?

I put the part of the quote I believe should be the way to go.
The (...) means there was more I don't agree with.

I probably caused the bold problem but having it spilled over to next comment is not a desirable feature.

Anyway, I would like to see the world use less fossil fuel but there is not enough biofuel to use to make enough hydrogen to make much of a dent in the problem. I think that working on using high temperature incineration to burn waste would be a better problem to work on. Or maybe the somewhat mythical plasma torch system. I cut down a dying tree a few days ago and took the cut up tree to the local (Salt Lake County) waste disposal. They used to have a lower price for green waste and use it for mulch but now it just goes to the land fill. Not a good solution.

I would like to see the world use less fossil fuel but there is not enough biofuel to use to make enough hydrogen to make much of a dent in the problem.


I cut down a dying tree a few days ago and took the cut up tree to the local (Salt Lake County) waste disposal. They used to have a lower price for green waste and use it for mulch but now it just goes to the land fill.

Thus turning much of it into methane, some of which will leak and become GHG.  You should have cut, stacked, seasoned and burned it yourself.