magniX, a company developing electric propulsion systems for aircraft, and AeroTEC, a leading independent company focused on aerospace testing, engineering and certification, announced the successful flight of an all-electric Cessna Grand Caravan 208B.

The successful flight of the eCaravan, enabled by a 750-horsepower (560 kW) magni500 propulsion system, took place at the AeroTEC Flight Test Center at the Grant County International Airport (KMWH) in Moses Lake, Washington on Thursday. 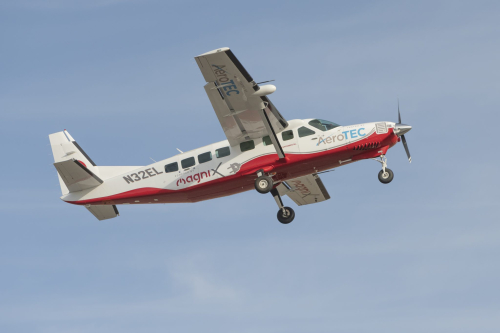 The iconic Caravan has been a workhorse of industry moving people and transporting goods on short routes for decades. This first flight of the eCaravan is yet another step on the road to operating these middle-mile aircraft at a fraction of the cost, with zero emissions, from and to smaller airports. These electric commercial aircraft will enable the offering of flying services of people and packages in a way previously not possible.

The flying of the eCaravan serves as another critical step in the certification and approval process of the magni500 propulsion system, enabling future conversions of additional aircraft to magniX’s all-electric propulsion technology. 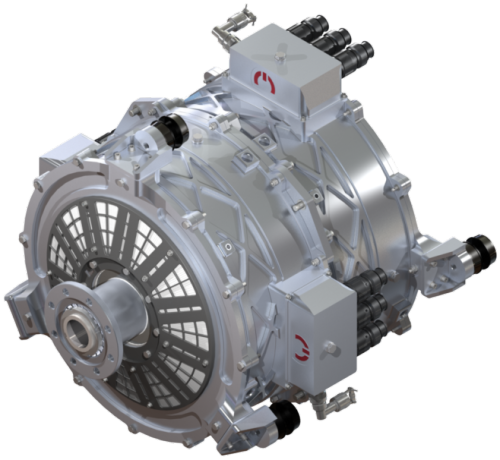 magni500. At a continuous 560 kw / 750 shp and turning at only 1900 RPM, the magni500 is well-suited as a propulsion system for retrofitting existing “middle-mile” aircraft such as the Caravan, Beaver, King Air, Otters and more. It is also suited for use in clean-sheet electric aircraft designs as a stand alone propulsion or as part of a larger multi-motor aircraft.

OK, but where does the energy come from and what is the aircraft performance?

More detail information is at FlightGlobal (https://www.flightglobal.com/airframers/all-electric-grand-caravan-makes-maiden-flight/138600.article) or Wikipedia.
The Cessna 208B Grand Caravan can carry 10-14 people.
This "eCaravan" was configured with the Magnix Magni500 Grand Caravan to carry 4-5 passengers on flights up to 100 miles, taking into account the need for reserve power. From the FlightGobal article: "The Magni500 on the Grand Caravan receives power from a 750V lithium-ion battery system weighing roughly one tonne, though Magnix is studying other technologies, including lithium-sulfur batteries and hydrogen fuel cells."

Excellent! Electric aircraft will drive the development for 'better batteries;' and, fuel cells for airliners.

I wonder what they do for cabin heat as it can get pretty cold at altitude at times.

That is what snuggling is for. Actually for a one hour flight they won't need to heat for very long. Perhaps the batteries will get warm? Maybe install a marine wood stove?

".. one 3-phase section can be turned off
allowing the pilot 75% of full power."
Nice safety feature.

5 passengers for 100 miles demonstrate why you need specially designed aircraft for electric power. You have a much tighter energy budget than a chemically powered one.
Also, how long will it take to recharge the aircraft on landing, or do they have swappable batteries.
I just read the article, 40 minutes recharging after a 30 minute flight, not possible to swap the batteries.
I think we have a bit to go.
Even if they get batteries with double the energy, you still only get 200 miles.
Would be handy for hopping over fjords or onto nearby islands.
As they say, low maintenance and fuel costs but very low energy.
The question is: should you convert existing ICE planes (which gives you a very cheap body but high weight and wind resistance), or build a specialist body which will perform better but cost a load more ?
There could be a business in building enginless electric planes and let other people put the engines and batteries in them.

The Cessna Grand Caravan is used by Harbour Air Seaplanes in Vancouver, Canada that plans to go all electric.They use single-engine aircraft (carrying between 6 to 19 passengers) and have routes of short length of (most average around 30 min or less). Harbour Air already has converted their other type aircraft (the DeHaviland Beaver) to use the Magnix 750 hp electric motor. While this is a limited application, it is still a significant milestone and proves that electric aviation works.

Nuvera and Powercell both have reformers to turn liquid fuel into hydrogen on the plane. The Powercell is 100 kW and weighs 100 pounds.

@sd--Ultimately, the most efficient and viable option for adequate-range-and-payload would be the use of liquid-hydrogen (LH2) and fuel cells (FC). LH2 has 1/3rd the weight of petroleum and when used in FC with efficiency of 60-70% vs 25% efficiency in small gas turbines would result in very low fuel weight per mile traveled. Fuel cell is modular and can be sourced from those developed for FCV cars and trucks in order to obtain very cost-effective power solution due to economy of scale when produced by the millions of units yearly and not merely a few hundred yearly for aero engines. The additional weight of the FC can be partially compensated for by the weight saving of direct-drive e-motor that can even double the power to weight ratio of turboprop power plants.

@Mahonj--your concern is true for battery powered aircraft, but for LH2-FC aircraft with far higher energy density and far higher energy efficiency, any existing aircraft would be able to double or triple the range with LH2-FC vs its petroleum version. So, all existing aircraft can be retrofitted with LH2-FC-e-motor and enjoy massive gain in energy efficiency, range and payload capacity.

@Gryf--Of course, electric aviation will work, but even more so with LH2-FC as energy medium, as detailed above.

@SJC--It would be far more efficient to use ultra-light Liquid Hydrogen-FC instead of using 3x heavier liquid fuel and having to carry bulky and heavy reformer as well. For large jetliners, the turbofan can approach the efficiency of FC-e-motor, so no need for FC-e-motor, because the turbofan can be powered by LH2 directly.