Representatives of the Lufthansa Group and Swiss Federal Institute of Technology Zurich (ETH Zürich), with ETH spin-offs Climeworks and Synhelion, have signed a joint Letter of Intent for a possible cooperation to accelerate the market launch of Sustainable Aviation Fuels (SAF).

The researchers and engineers at ETH Zurich have developed innovative processes that make it possible to extract CO2 from the atmosphere and, together with water and with the help of concentrated sunlight, convert it into a synthesis gas that can be used to produce jet fuel.

Such a fuel releases only as much CO2 as was previously extracted from the atmosphere. It is the common goal of the signatories to prepare these promising technologies for later production on an industrial scale.

The partnership initiated by the Lufthansa Group subsidiaries SWISS and Edelweiss is to include, among other things, cooperation in the areas of technology and economic efficiency. It is also intended to agree on acceptance quotas of SAF at a later date in order to support future demonstration projects of the partners. Further contents of the cooperation are to be worked out by the end of 2020.

Synhelion was founded in 2016 at ETH Zurich and is working on bringing solar fuels to the market. Synhelion uses solar heat to convert water and CO2 into synthetic fuels. Solar radiation from the mirror field is absorbed in the receiver and converted into high-temperature process heat (>1000 °C), which drives a thermochemical reactor to produce syngas.

The syngas is then processed by standard gas-to-liquids technology into fuels. The integrated thermal energy storage enables continuous 24/7 fuel production.

Climeworks, a company founded at ETH Zurich in 2009, is pursuing CO2 air separation to provide the carbon required for fuel synthesis in a sustainable manner.

Climeworks machines consist of modular CO2 collectors that can be stacked to build machines of any size. Climeworks direct air capture machines are powered solely by renewable energy or energy-from-waste. Grey emissions are below 10%, which means that out of 100 tons of carbon dioxide that the machines capture from the air, 90 tons are permanently removed and only 10 tons are re-emitted. 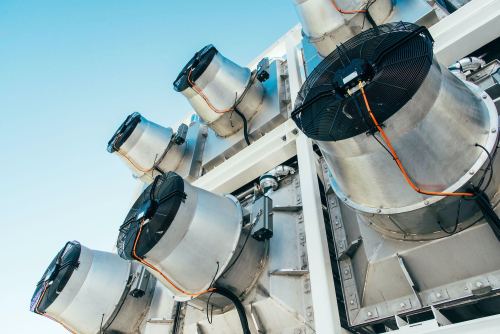 Both companies are thus developing key technologies for the production of SAF.

Over the past decade, the Lufthansa Group has been intensively engaged in researching, testing and using sustainable alternative aviation fuels and has pioneered the world’s first long-term testing of biofuel in regular flight operations in 2011. Later, the company became involved in basic research into the mixing behavior of alternative and conventional kerosene and selectively used fuels from novel synthesis processes.

Since then, the Lufthansa Group has been driving forward key technologies for the production of sustainable aircraft fuels through targeted cooperations. The focus is on sustainable fuels based on residual materials, woody biomass and renewable electrical energy (Power-to-Liquid). Lufthansa had signed a Letter of Intent with the Heide refinery in 2019 in this regard.

Since August 2019, the Group has also been using the “Compensaid” online platform developed by the Lufthansa Innovation Hub to enable passengers to offset the CO2 emissions of a flight with SAF, regardless of the airline they choose.

"Such a fuel releases only as much CO2 as was previously extracted from the atmosphere."
THAT is the idea!

Jet engines burning carbon fuel of any kind are gross polluters. Hydrogen either directly or indirectly in FCs is the preferred fuel at altitude.

I would be curious to know the final cost of the fuel . Co2 extraction , solar concentration, fisher trop conversion are all expensive technologies

Lad,
I would agree except getting range is the issue.
This is NO sulfur fuel, fossil jet fuel is 1000 ppm sulfur.

SC_1 sulfur should be added to jet fuel once the aircraft reach 30 000 feet as SO2 spewed in the stratosphere is a powerful reflector of sunlight and therefore fight warming. Sulfur in the stratosphere is not directly harmful and can stay a year or two there , very little is needed to have a measurable effect, much than what we release at ground level burning coal

Sulfur creates particulates, NOT a good thing to have in the air.