Ben Wiley, a professor of chemistry at Duke University and his team are investigating how nano- and microstructured porous electrodes can improve the productivity of hydrogen generation in a zero-gap, flow-through alkaline water electrolyzer.

Wiley and his lab recently studied three nickel electrodes—foam, microfiber felt, and nickel-copper nanowire felt—to examine the tradeoff between surface area and pore structure on the performance of electrolyzers. Their goal was to increase the surface area of the electrode for reactions, while avoiding trapping the gas bubbles that are produced. Their paper appears in Advanced Energy Materials. 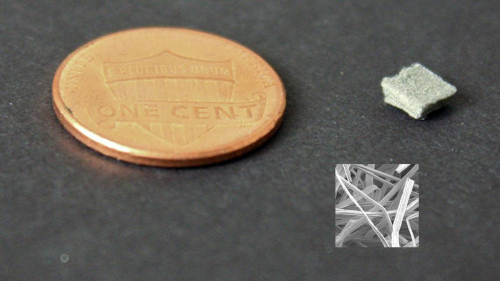 An example of the small, flow-through electrode that Duke researchers used to produce more hydrogen from electrolysis with a penny for scale. Inset: Electron microscope view of the felt. (Wiley Lab, Duke University)

The maximum rate at which hydrogen is produced is limited by the bubbles blocking the electrode—literally blocking the water from getting to the surface and splitting.

Pulsing current through the electrodes for five minutes on, five minutes off, they found that the felt made of nickel-copper nanowires initially produced hydrogen more efficiently because it had a greater surface area than the other two materials. But within 30 seconds, its efficiency plunged because the material got clogged with bubbles.

The nickel foam electrode was best at letting the bubbles escape, but it had a significantly lower surface area than the other two electrodes, making it less productive.

The sweet spot turned out to be a felt of nickel microfiber that produced more hydrogen than the nanowire felt, despite having 25% less surface area for the reaction.

Over the course of a 100-hour test, the microfiber felt produced hydrogen at a current density of 25,000 milliamps per square centimeter. At that rate, it would be 50 times more productive than the conventional alkaline electrolyzers currently in use for water electrolysis, the researchers calculated.

Although the nanowire felt with the highest surface area initially provides the highest performance, this performance quickly decreases as gas bubbles are trapped within the electrode. The open structure of the foam facilitates bubble removal, but its small surface area limits its maximum performance. The microfiber felt exhibits the best performance because it balances high surface area with the ability to remove bubbles. The microfiber felt maintains a maximum current density of 25 000 mA cm−2 over 100 h without degradation, which corresponds to a hydrogen production rate 12.5- and 50-times greater than conventional proton-exchange membrane and alkaline electrolyzers, respectively.

Wiley said commercial producers of water electrolyzers may be able to make improvements in the structure of their electrodes based on what his team has learned. If they could greatly increase the hydrogen production rate, the cost of hydrogen produced from splitting water could go down, perhaps even enough to make it an affordable storage solution for renewable energy.

Wiley is also working with a group of students in Duke’s Bass Connections program who are exploring whether flow-through electrolysis might be scaled up to make hydrogen from India’s abundant solar power.

This research was supported by National Science Foundation CAREER award (DMR- 1253534), and a grant from the Duke University Energy Initiative.

This means energy density, the same size until can produce more.