As of 26 May 2020, NIO Power has completed more than 500,000 EV battery swaps in China, becoming one of NIO’s most well-received power services. 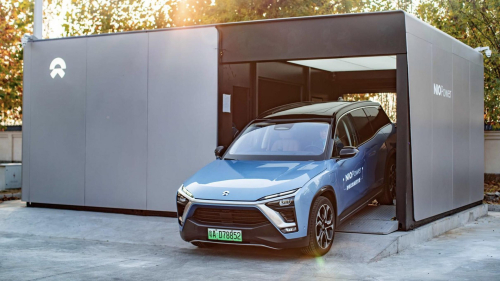 Power Swap is at the core of NIO’s “chargeable, swappable, upgradable” user experience, alongside a comprehensive battery and vehicle e-powertrain inspection. The infrastructure also enables users to enjoy the benefits of the development of battery technology continuously, with the ease of upgrading to a higher capacity and better performance simply through swapping.

With the announcement of a new China subsidy policy on 23 April that new energy vehicles with battery swap technology can continue to enjoy subsidies from 2020 to 2022, the confidence in NIO’s technological direction and business model has been reinforced. Wuhan NIO Energy in Donghu District, Wuhan, has also accelerated the deployment of the battery swap network. As of 20 May 2020, 131 battery swap stations had been installed across 58 cities nationwide.

The Power Swap network concentrated in the Beijing-Tianjin-Hebei region, the Yangtze River Delta and the Pearl River Delta allows NIO users to enjoy a worry-free user experience in these three major economic zones, as with the G2 Beijing–Shanghai Expressway and the G4 Beijing–Hong Kong–Macau Expressway.

Power Swap made its debut at NIO Day in December 2017. On 20 May 2018, NIO opened its first battery swap station in Nanshan High Tech Industrial Park, Shenzhen.

China is way ahead of the other countries and will be more so in the future.

Pack valuation seems to be an issue, how much is your pack worth?