Nikola Corporation, which is making its public-trading debut on the NASDAQ today (NKLA), signed a purchase order with Nel ASA for 85-megawatt alkaline electrolyzers to support five of the world’s first 8-tonne-per-day hydrogen fueling stations. Together, these electrolyzers may produce more than 40,000 kgs of hydrogen each day.

The purchase order has a value in excess of US$30 million, and the electrolyzers will primarily be delivered from the new electrolyzer mega-factory currently under development in Norway. This purchase order will support Nikola’s five initial stations with 8 ton per day hydrogen production capacity. The remaining equipment will be covered by a separate purchase order that is expected to be finalized within the coming months. 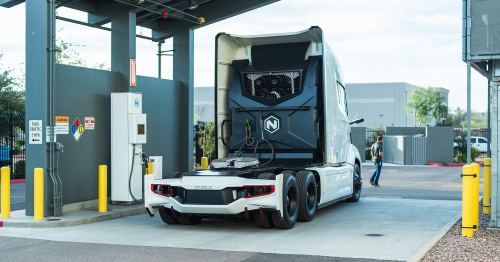 These electrolyzers will support five heavy duty hydrogen stations which will cover multiple states and trucking routes. The future of clean transportation is here, and fleets are lining up to be part of the transition with Nikola.

The framework agreement was one of the key triggers for Nel deciding to develop it’s alkaline electrolyzer mega-factory in Norway and has enabled Nikola to reserve capacity in the new plant.

The transaction proceeds are expected to accelerate vehicle production, allow Nikola to break ground on its state-of-the-art manufacturing facility in Coolidge, Arizona, and continue its hydrogen station infrastructure roll out.

The company expects to generate revenue by 2021 with the rollout of its Nikola Tre Class 8 BEV, followed by the Nikola Two Class 8 FCEV starting in 2023. The build out of hydrogen fueling stations will serve Nikola customers’ fleets, such as Anheuser-Busch.

Nel Hydrogen’s roots date back to 1927, when Norsk Hydro developed large-scale electrolyzer plants, providing renewable hydrogen for use in ammonia production with fertilizer as the end-product. Today, Nel has the world’s largest product portfolio of alkaline and PEM electrolyzers and is continuously developing and improving both technologies.

Initiatives include a next-generation large scale, pressurised alkaline electrolyzer as well as larger PEM stacks, and large-scale solutions which allow for significant cost reductions on a system level.