Each company will invest in the joint venture. Dong Changzheng will be appointed chairman and Ryu Akita will be chief executive officer (CEO). Plans call for FCRD to be established in Beijing during 2020.

In accordance with the Technology Roadmap for Energy-Saving and New Energy Vehicles announced by China in 2016, the FCEV market, primarily for commercial vehicles, is growing at a pace not seen anywhere else in the world. Based on the belief that industry-wide efforts to build the foundations for the widespread adoption of FCEVs under an open structure rather than measures by individual companies will be essential for the spread and firm establishment of FCEVs in the Chinese market, which is undergoing these extreme changes, these six companies, which share a common vision for FCEVs, decided to establish an R&D joint venture. 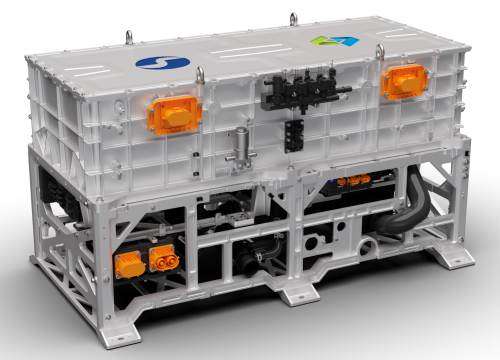 The manufacturers of completed vehicles, which represent China’s extensive commercial vehicle development know-how and market experience along with SinoHytec and Toyota, which have experience with FC system development as well as results in the market, believe that they can work together as partners to promote the spread of FCEVs and develop competitive fuel cell systems that comply with regulations in China.

Specifically, the six companies will engage in discussions to formulate product plans and create a single streamlined structure to develop a series of technologies from components including FC stacks that satisfy performance needs in China and FC system controls that support those components, to vehicle installation.

The companies believe that by doing this, the lead time from development to commercialization will be substantially shortened, making it possible to dramatically increase the pace of each stage of FCEV proliferation in the Chinese commercial vehicle market. They will tackle the challenges of developing low-cost, competitive fuel cell systems and their key components with superior product strengths including the drive performance, fuel efficiency, and durability that will be essential for the widespread adoption of FCEVs.

FCRD is a company that holds tremendous significance for Toyota's global FC strategies. There is no other automobile market with such a sense of speed, and I am extremely confident that we will gain partners we can work with toward the shared target of expanding the use of FCEVs in China. As I regularly state, it is important to find partners to promote the electrification of cars, and by working with companies that have considerable influence in China's commercial vehicle market as well as SinoHytec, which has reliable technological capabilities, I believe that we will be able to establish the foundations for the widespread use of FCEVs in China. Toyota is committed to deepening its undertakings for the development of the FCEV industry in China through open collaborative relationships with its partners.

Anyone want to bet that China will not roll out a comprehensive network for hydrogen production and distribution for trucks at an enormous rate?

And of course FCEV cars can piggy-back on that infrastructure.

IMO, there are two ways to do long range zero carbon transport: compressed H2 or motorway catenaries.
H2 has the problem that it is inefficient and basically an awful fuel, catenaries have the problem of capital cost and the risk of getting them wrecked by careless road users.

You would have to make a dynamically attachable / removable catenary that could automatically attach while underway at full speed and treat the catenaries as no-stop charging wires rather than full journey zones.
Thus, you might be able to only cover 20-30% of the road, and could handle junctions more easily.

Well to wheel, hydrogen is around as effcient in energy use as petrol, and possibly a touch less so that diesel in a big rig assuming hydrogen from NG and no use of process heat.

It is also zero pollution at point of use, and evaporates upwards far more readily than it explodes.

Then you have hydrogen from renewables, which are becoming increasingly economic

What is so awful and hopeless for efficiency about any of that?

@Dave, nothing as efficient as battery or direct electric.
If you can transmit the renewable electricity directly to the vehicles or via a battery for shorter range, it is much better.

Won't work for aircraft (but neither will H2).

Batteries aren't up to it for anything other than very short distance as the energy density is too low, fuel cell systems even with the CF tank and so on are way better.
And since most places are going for renewables, then you need the power available when you want to use it, which is OK with hydrogen, not with electricity, not to mention the huge loads that heavy trucking would put on the grid to charge BEV trucks in any reasonable time, and the limited life of the batteries.

That is why the likes of Daimler and just about everyone else are looking to hydrogen for heavy trucking.

Why do you think they would do that if batteries could do the job?

Short runs and deliveries, fine, but not anything longer.

If you reform bio methane, the hydrogen cost is lower.
Put the methane into a turbine, make electricity, transmit it, convert it, round trip in the batteries, then tell us how efficient that is.