The California Energy Commission has released a UC Irvine roadmap for the buildout and deployment of renewable hydrogen production plants in California to support policy decisions and inform stakeholders.

The study concludes that, with appropriate policy support, the renewable hydrogen sector can reach self-sustainability (price point at parity with conventional fuel on a fuel-economy adjusted basis) by the mid- to late-2020s. 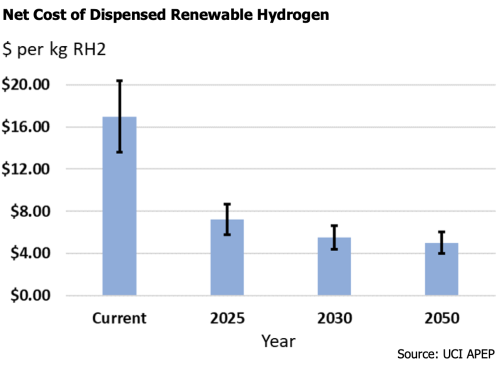 The roadmap defines actions needed to support an optimal deployment of renewable hydrogen production plants needed to meet the growing demand for renewable hydrogen. The analysis builds upon insights from early market development and a series of analyses developed for the roadmap on current and future technology costs, feedstock supply and cost, siting and factory buildout, and demand growth.

Costs incurred from the production plant through the hydrogen refueling station were analyzed using the HDSAM 3.1 tool developed by Argonne National Laboratory augmented with a learning-curve forecast of cost-reduction potential.

The analysis projects plant gate-to-dispenser costs to decline from around $16 per kilogram (excluding subsidies and credits) at present to a midpoint estimate of $6 by 2025, declining to below $5 by 2050 with a low-end estimate of $4 per kilogram. The biggest factor in the cost decline is increased station utilization (fuel dispenses as a fraction of full capacity) with economies of scale and technology progress also contributing.

The analysis also found that the dispensed price of hydrogen is likely to meet an interim target based on fuel-economy-adjusted price parity with gasoline of $6 to $8.50 per kilogram by 2025. Furthermore, reaching the long-term DOE target of $4 per kilogram is within the forecast band for 2050, but the base forecast is around $5 per kilogram.

' The biggest factor in the cost decline is increased station utilization (fuel dispenses as a fraction of full capacity) with economies of scale and technology progress also contributing.'

So unliike for batteries competitive hydrogen is essentially just a case of more volume, and cars on the road.

I think people should be aware that by far the largest EV market, China, is also in the throes of starting the roll out of a comprehensive hydrogen network, focussed on supplies for heavy trucking, but that would still make it available for cars.

The missing piece of the puzzle is economic FCEV cars.
How close we are to that will become more clear when the Mirai II is released.

Toyota reckon they can reduce the premium over hybrids to zero by around 2025 or so.
That would be an awesome achievement if they do it.
I am not really sure how they will manage it, as the carbon fibre tank is an expensive piece of kit although the costs are falling and will do so more with volume.

But Toyota engineering commands respect from anyone who is not a complete fool, and they won't have made the claim lightly.

Reform bio methane to get hydrogen below $4 per gallon retail.

H2 becoming competitively priced vs gasoline is not going to make it a competitive transportation fuel.

When a consumer goes to a dealership looking for a new alt-fuel car, the TCO comparison will be to electric.

Now that almost all electrics feature 200+ mile range and some offer up to 400 mile range, fuel cell vehicles do not offer any compelling advantages.

The infrastructure roll out still lags badly. An H2 station continues to be far more expensive to install than electric.

H2 has its advocates on forums but consumers are going to be a bit more pragmatic.

H2 makes sense for Aircraft and Ships, not cars/trucks. Doesn't make sense for the health of the Planet unless the H2 is created from hydrolysis, not FF reforming by the pollution companies.

It is Tesla BEVs that have had the fire problem, not Toyota Mirai.

Anywhere where it gets cold in the winter loses a lot of range with a BEV, aside from the fact that the vast majority of the world's motorists not only can't plug in at home but in no conceivable way will be able to in the future.

Money is being extorted from poorer motorists so that the more wealthy can play with their toys, when hybrids are many, many times more effective on reducing GHG and poisonous emissions per dollar, until we have PFEVs at good cost.

Manganese hydride Kubas -1 storage if it can be made to work and it looks no more challenging to do so than advanced battery concepts would reduce the cost even more, to untouchable levels for big battery BEVS.

Toyota is projecting FCEV to be as popular as its hybrid. Also, the cost of hydrogen will be at cost parity to fuel in the near future. The technology certainly has a huge advantage of low weight, high power density, longer range, and quick recharge. Our natural gas pipelines are more efficient as compared to the grid.

Toyota has fuel cells they will use for other applications.
If they want to drive the costs down,
settle on the best design and several make them.