Scientists at Tokyo Institute of Technology (Tokyo Tech) have developed a hybrid material constructed from a metal oxide nanosheet and a light-absorbing molecule for splitting water molecules (H2O) to obtain hydrogen (H2) under sunlight.

The research team led by Kazuhiko Maeda at Tokyo Tech developed a new photocatalyst consisting of nanoscale metal oxide sheets and a ruthenium dye molecule, which works according to a mechanism similar to dye-sensitized solar cells. While metal oxides that are photocatalytically active for overall water splitting into H2 andO2O2 have wide band gaps, dye-sensitized oxides can utilize visible light, the main component of sunlight. The new photocatalyst is capable of generating H2 from water with a turnover frequency of 1,960 per hour and an external quantum yield of 2.4%. 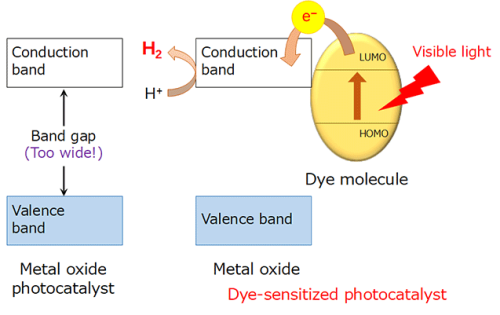 These results are the highest recorded for dye-sensitized photocatalysts under visible light, bringing Maeda’s team a step closer to the goal of artificial photosynthesis—replicating the natural process of using water and sunlight to sustainably produce energy.

The new material, reported in the Journal of the American Chemical Society, is constructed from high-surface-area calcium niobate nanosheets (HCa2Nb3O10) intercalated with platinum (Pt) nanoclusters as H2-evolving sites. However, the platinum-modified nanosheets do not work alone, as they do not absorb sunlight efficiently. So a visible light-absorbing ruthenium dye molecule is combined with the nanosheet, enabling solar-driven H2 evolution. 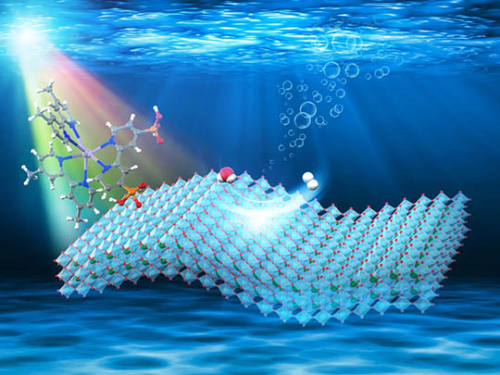 What makes the material efficient is the use of nanosheets, which can be obtained by chemical exfoliation of lamellar HCa2Nb3O10. The high-surface-area and structural flexibility of the nanosheets maximize dye-loadings and density of H2 evolution sites, which in turn improve H2 evolution efficiency.

Unprecedentedly, the alumina modification for nanosheets promotes dye-regeneration during the reaction, without hindering electron injection from the excited-state dye to the nanosheet—the primary step of dye-sensitized H2 evolution.

Until just recently, it was considered very difficult to achieve H2 evolution via overall water splitting under visible light using a dye-sensitized photocatalyst with high efficiency. Our new result clearly demonstrates that this is indeed possible, using a carefully designed molecule-nanomaterial hybrid.

More research still needs to be done, as it will be necessary to further optimize the design of the hybrid photocatalyst to improve the efficiency and long-term durability.

Does a day go by without one of these "discoveries"?

If it had not been done before it is a discovery.
What have you discovered to help human kind?