Scientists from Kyushu University and Kumamoto University in Japan have developed a new catalyst capable of assisting three key reactions for using hydrogen in energy and industry. Inspired by three types of enzymes in nature, this research can help elucidate unknown relationships among catalysts, paving the way for efficient use of hydrogen gas as a next-generation energy source in the future.

A hydrogen energy economy will require not only catalysts capable of H2 oxidation but also those that can put it back together again. The design of these catalysts takes much inspiration from hydrogenase enzymes (H2ases) because they perform just such chemistry in nature. These enzymes come in three distinct varieties, as determined by the metals at their active sites: [NiFe] H2ases, [FeFe] H2ases, and [Fe] H2ases. The H2ases can be classified according to their reactivity differences, as well as their structural differences. [NiFe] H2ases are more useful for H2 oxidation than evolution, while [FeFe] H2ases are more useful for H2 evolution, and [Fe] H2ases can catalyze hydride (H−) transfer. It is not surprising then that model studies have so far treated these three H2ases as different species.

One key for establishing hydrogen as a next-generation energy source is the development of catalysts that help use it efficiently. Catalysts play a role not only in splitting hydrogen molecules to generate electricity in fuel cells but also in putting hydrogen atoms together to form the fuel. Hydrogen also has many applications in the chemical industry, often being attached to molecules through the process of hydrogenation to modify their properties.

Nature has already developed its own set of biological catalysts—i.e., enzymes—capable of these same fundamental reactions. However, each of these three reactions requires a different type of enzyme, and these hydrogenase enzymes can be grouped by the metals they contain: an atom each of nickel and iron, two atoms of iron, or a single atom of iron.

Taking inspiration from nature, research teams led by Seiji Ogo from Kyushu University and Shinya Hayami from Kumamoto University now report in an open-access paper in the journal Science Advances that a single catalyst can perform all three roles.

Looking closely at key structures of the three types of hydrogenase enzymes in nature, we were able to design a molecule that could mimic all of these structures depending on where hydrogen attaches to it.

The catalyst the scientists developed contains nickel and iron as the key metals. Depending on reaction conditions, hydrogen atoms will connect to the molecule in a slightly different way, leading to a twisting of the molecule that puts it in a configuration best suited for one of the three types of reactions.

While the enzymes in nature rely on different sets of metals to accomplish these reactions, the newly developed catalyst takes advantage of the molecular twist being enough to switch between structures similar to those of the three types of enzymes, thereby obtaining similar functions without changing the metals.

In a way, we’ve created a molecule with a steering wheel on it. By turning the steering wheel and twisting parts of the molecule, we can turn it into three different types of catalysts—one for fuel cells, one for hydrogen production, and another for hydrogenation. This has allowed us to unravel three functions that were previously intertwined. 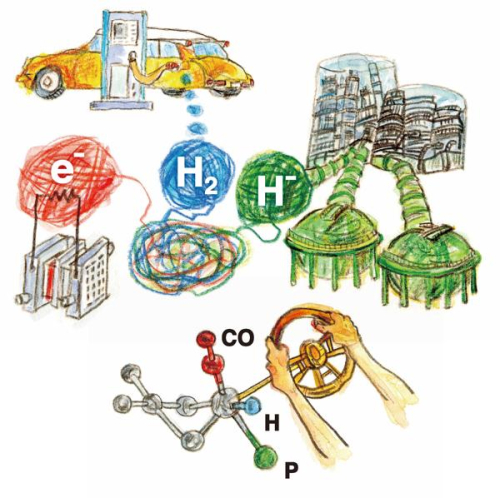 By turning the red, blue, and green positions of one catalyst like turning the steering wheel of a car, a single molecule can be turned into three types of catalysts for fuel cells, hydrogen production, or hydrogenation. The new insights from this work help unravel relationships between three catalysts that were previously intertwined. Credit: Kyushu University

While the molecule may not be suitable for practical applications at present, it points toward the possibility of developing a single catalyst with multiple uses. More importantly, the better understanding of the catalytic processes afforded by this molecule can give crucial insight into natural enzymes and the development of future catalysts for realizing a hydrogen-powered society.

This research has been carried out as a part of the research supported by the Japan Science and Technology Agency (JST) for CREST Grant Number JPMJCR18R2 and the Ministry of Education, Culture, Sports, Science and Technology (MEXT) Grant-in-Aid for Specially Promoted Research, Grant Number JP26000008, “New Energy Sources from Hydrogenase-Photosynthesis Models,” by Professor Seiji Ogo and his research group at the Center for Small Molecule Energy (Seiji Ogo, head of the center), Graduate School of Engineering, Kyushu University, as well as the International Institute for Carbon-Neutral Energy Research (I2CNER, Petros Sofronis, director of the institute) base of the World Premier International Research Center Initiative (WPI) established by MEXT, and Fukuoka Industry-Academia Symphonicity.

Hi Harvey,
Welcome back, it's been a while
I hope you are (and have been) well.
jm

Interesting that the car shown is a Citroen DS.
Seiji Ogo must be a Francophile.