The weight of heavy-duty trucks as they drive causes a slight deflection in the road surface under them—enough of a dip to make a difference to the trucks’ overall fuel efficiency (deflection-induced pavement-vehicle interaction). Now, a study by MIT researchers suggests that small changes in roadway paving practices could reduce that efficiency loss, at little to no cost.

The analysis shows that increasing the modulus of elasticity using 10% resurfacing in the network per year leads to an 18% reduction of GHG emissions from the pavement network, or 440 Mt CO2eq, over a 50-year analysis period. This would potentially offset 0.5% of the future GHG emission of the whole transportation sector.

The findings are detailed in a paper in the journal Transportation Research Record. The study examined state-by-state data on climate conditions, road lengths, materials properties, and road usage, and modeled different scenarios for pavement resurfacing practices. 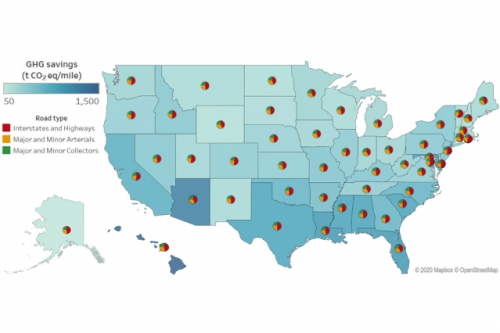 Map shows the potential reductions in overall greenhouse gas emissions from the transportation sector, state by state, that could be achieved by policies emphasizing the use of stiffer road surfaces. The greatest potential gains are seen across the southern part of the country. Image: courtesy of the researchers

The researchers found that that one key to improving mileage efficiency is to make pavements that are stiffer. That reduces the amount of deflection, which reduces wear on the road but also reduces the slightly uphill motion the vehicle constantly has to make to rise out of its own depression in the road.

When we as individuals walk on pavements, they seem like perfectly rigid things. They’re not responding to us. But for trucks, that is not the case. There is enough of a deflection in that surface that some amount of energy is expended to overcome the little divot that you create as you drive along.

Kirchain likens it to the difference between walking on a hard surface versus walking on sand, which takes more effort because you sink in with each step. Looking to the future, Kirchain says that while projections show a slight decline in passenger car travel over coming decades, they show an increase in truck travel for freight delivery—the kind where pavement deflection could be a factor in overall efficiency.

There are several ways to make roadways stiffer, the researchers say. One way is to add a very small amount of synthetic fibers or carbon nanotubes to the mix when laying asphalt. Just a tenth of a percent of the inexpensive material could significantly improve its stiffness, they say. Another way of increasing rigidity is simply to adjust the grading of the different sizes of aggregate used in the mix, to allow for a denser overall mix with more rock and less binder.

Yet another way is to switch from asphalt pavement surfaces to concrete, which has a higher initial cost but is more durable, leading to equal or lower total lifecycle costs. Many road surfaces in northern US states already use concrete, but asphalt is more prevalent in the south. There, it makes even more of a difference, because asphalt is especially subject to deflection in hot weather, whereas concrete surfaces are relatively unaffected by heat.

Just upgrading the road surfaces in Texas alone, the study showed, could make a significant impact because of the state’s large network of asphalt roads and its high temperatures.

Kirchain, who is co-director of MIT’s Concrete Sustainability Hub, says that in carrying out this study, the team is “trying to understand what are some of the systemic environmental and economic impacts that are associated with a change to the use of concrete in particular in the pavement system.”

Even though the effects of pavement deflection may seem tiny, he says, “when you take into account the fact that the pavement is going to be there, with thousands of cars driving over it every day, for dozens of years, so a small effect on each one of those vehicles adds up to a significant amount of emissions over the years.” For purposes of this study, they looked at total emissions over the next 50 years and considered the reductions that would be achieved by improving anywhere from 2% of road surfaces to 10% each year.

With a 10 imp%rovement rate, they calculated, a total of 440 megatons of carbon dioxide-equivalent emissions would be avoided over the 50 years, which is about 0.5% of total transportation-related emissions for this period.

The proposal may face some challenges, because changing the mix of materials in asphalt might affect its workability in the field, perhaps requiring adjustments to the equipment used, as well as potentially adding cost.

But overall, implementing such changes could in many cases be as simple as changing the specifications required by state or local highway authorities.

The research was supported through the Concrete Sustainability Hub by the Portland Cement Association and the Ready Mixed Concrete Research and Education Foundation.