The FC generator has been set up within the Tokuyama Factory grounds in Shunan City, Yamaguchi Prefecture. The tests are scheduled to continue until the end of March 2022. 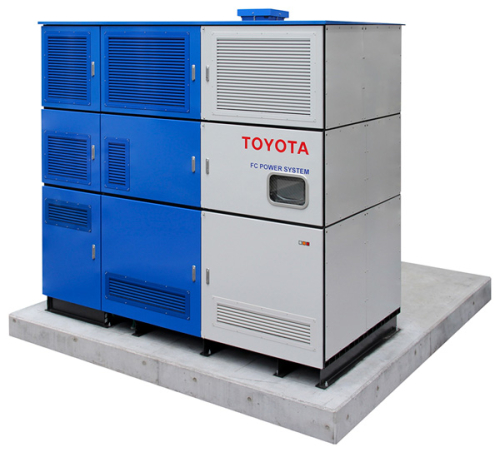 By using components from the Mirai FC system—the FC stack, power control unit (PCU), secondary battery, and air compressor—Toyota seeks to produce a high-performance generator at a reasonable price. Development on the FC generator was carried out jointly by Toyota and Toyota Energy Solutions, Inc. 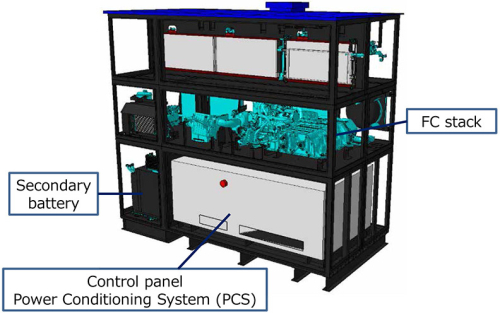 The newly introduced FC generator is based on the FC generator with a rated output of 100 kW that has undergone verification tests since September 2019 at Toyota’s Honsha Plant grounds in Toyota City, Aichi Prefecture. The rated output has been changed to 50 kW, and other enhancements have been made, such as adjusting the component layout to improve maintenance. 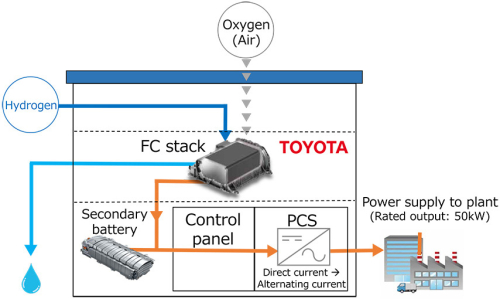 A feature of the new tests is the use of hydrogen generated as a by-product in the manufacture of sodium hydroxide by Tokuyama, using the chloralkali process as fuel for the FC generator.

Tokuyama will be responsible for the steady supply of by-product hydrogen, and the electricity produced by the FC generator will be supplied to the Tokuyama Factory at a rated output of 50 kW.

Toyota will verify and evaluate aspects including the energy efficiency—the amount of electricity generated per unit of hydrogen—the stability of the generated output, durability, ease of maintenance of the generator, and the impact of salt-air damage from the sea breezes. In addition, the tests will be used to estimate the impact on power generation from the use of by-product hydrogen, and the economics of this in comparison with purchasing from an external source.

Moving forward, Tokuyama will consider a business model, which contributes to the local community, as one of the leading Japanese comprehensive chemicals manufacturers with the capacity to supply highly pure by-product hydrogen. In order to expand use of the FC generator, Toyota will consider research and development, and business models for improving the generator’s product appeal, through the expansion of the FC generator output lineup, and by enhancing its energy efficiency and durability, making it more compact, and reducing costs.

Toyota are leveraging their fuel stack really well, for trucks, buses and now stationary storage.
The volumes, which though still low are way higher than other applications, are driving costs down.

Their current expansion to ~10 times the volume they did for the Mirai I should help a lot.

Using two of the 100 kW fuel cells in long haul trucks would work.
Once you get production there the cost per unit comes down.