Though their designs have changed considerably over the past two decades, late-model SUVs still appear to be more likely to kill pedestrians than cars, a new study from the Insurance Institute for Highway Safety found.

Thanks to advances in safety, the number of people killed in motor vehicle crashes in the US has fallen from more than 50,000 in 1980 to 36,560 in 2018. Over the past decade, however, the number of pedestrians killed on American roads has ticked steadily upward.

The proportion of SUVs in the US fleet has grown dramatically, so it’s discouraging that they still seem to be more deadly to pedestrians than cars are.

Analyzing a sample of 79 crashes from three urban areas in Michigan, the researchers found greater risk to pedestrians from SUVs. Because the sample size is small and limited to one geographic region, more research will be required to see whether all of the findings hold up in a larger study. 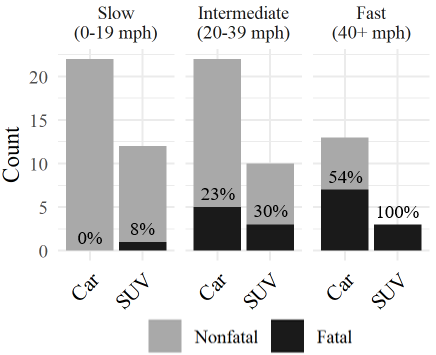 In the Michigan crashes, SUVs caused more serious injuries than cars when impacts occurred at speeds greater than 19 mph. At speeds of 20-39 mph, 3 out of 10 crashes with SUVs (30%) resulted in a pedestrian fatality, compared with 5 out of 22 for cars (23%). At 40 mph and higher, all three crashes with SUVs killed the pedestrian (100%), compared with 7 out of 13 crashes involving cars (54%).

Below 20 miles per hour there was little difference between the outcomes, with pedestrians struck by either vehicle type tending to sustain minor injuries.

The number of pedestrians killed by vehicles rose 53% from 2009 to 2018, the latest year for which statistics are available. Over the same period, the share of SUVs in the US passenger vehicle fleet rose to 29% from 21%, according to vehicle registration data from IHS Markit. Pedestrians now account for nearly a fifth of all traffic fatalities—a proportion not seen since the early 1980s.

A previous IIHS study found that pedestrian crashes have become both deadlier and more frequent. Although pedestrian crashes most frequently involved cars, fatal single-vehicle crashes involving SUVs striking pedestrians increased 81% from 2009 to 2016, more than any other type of vehicle.

Earlier research had shown that SUVs, pickup trucks and passenger vans were 2-3 times more likely than cars to kill a pedestrian in the event of a crash. However, most earlier studies were based on crash data collected in the 1970s, 80s and 90s. Since then, SUV manufacturers have made substantial design changes.

To provide an updated comparison, IIHS researchers analyzed detailed crash data compiled by the International Center for Automotive Medicine Pedestrian Consortium. Each crash involved one SUV or car and one pedestrian over the age of 13. The median model year for the vehicles involved was 2009, and three-quarters of them were built between 2004 and 2013.

The Michigan crashes are not necessarily representative of those that occur nationwide. However, the injury patterns were consistent with earlier, national studies in showing that SUVs were more likely than cars to throw pedestrians forward and nearly twice as likely to cause severe hip and thigh injuries.

These injuries were mainly caused by impacts with the bumper, grille or headlights. That’s likely because the high point of the front profile or “leading edge” of most new SUVs is still considerably higher than that of the average car.

In recent years various SUV manufacturers have adopted more car-like designs. Part of those changes were intended to address the risk that SUVs posed to car occupants. Bumpers and other force-absorbing structures were lowered so that they aligned better with those of cars. As a result, SUVs no longer pose a greater threat to the occupants of other vehicles than cars of comparable weight.

There hasn’t been a similar widespread effort to address the danger that SUVs pose to pedestrians, and the changes made to improve compatibility with cars wouldn’t be expected to improve outcomes for pedestrians. In pedestrian crashes, the location of the force-absorbing structures is less important than the overall shape of the front end.

In a crash with a traditional, block-front SUV, the grille strikes the pedestrian’s pelvis or chest split seconds after the bumper hits the lower extremities, transferring more energy to the pedestrian’s body. It’s possible that a more sloping profile could do less damage.

IIHS plans to use the Michigan crash data to look into what kind of SUV profile poses the least risk to struck pedestrians.

Europe has also introduced pedestrian airbags and other features that have been shown to mitigate injuries in crashes with cars, but the small portion of SUVs in the European fleet means there isn’t much evidence to show how effective they have been for these taller, blockier vehicles.

Our findings provide more evidence that manufacturers need to make design changes to help combat the increase in pedestrian fatalities now that more of the vehicles on the road are SUVs.

I suppose the further up the body you hit them, the more damage you do.
Part of it will be distracted drivers and pedestrians in their own worlds on their phones, maybe with headphones.

FYI, car type SUVs are becoming very popular in Europe (H Tuscon, VW T-Roc, Nissan Qashqai etc.
So not a lot of good news in this department (for pedestrians).

With aluminum frames and carbon fiber panels
they don't need to weigh as much.