Engineers at the McKelvey School of Engineering at Washington University in St. Louis (WUSTL) have developed high-power direct borohydride fuel cells (DBFC) that operate at double the voltage of conventional PEM hydrogen fuel cells. Their research was published in an open-access paper in the journal Cell Reports Physical Science.

The development of high-power fuel cells could advance the electrification of the transportation sector, including marine and air transport. Liquid-fueled fuel cells are particularly attractive for such applications as they obviate the issue of fuel transportation and storage. 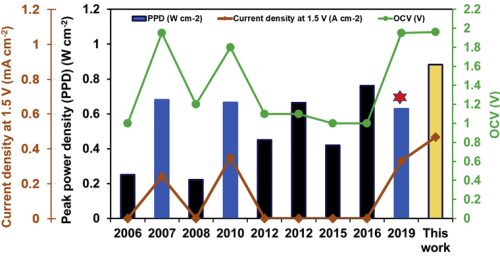 Doubling the voltage would allow for a smaller, lighter, more efficient fuel cell design, which translates to significant gravimetric and volumetric advantages when assembling multiple cells into a stack for commercial use. The approach is broadly applicable to other classes of liquid/liquid fuel cells.

The reactant-transport engineering approach provides an elegant and facile way to significantly boost the performance of these fuel cells while still using existing components. By following our guidelines, even current, commercially deployed liquid fuel cells can see gains in performance.

The key to improving any existing fuel cell technology is reducing or eliminating side reactions. The majority of efforts to achieve this goal involve developing new catalysts that face significant hurdles in terms of adoption and field deployment.

Hydrogen bubbles formed on the surface of the catalyst have long been a problem for direct sodium borohydride fuel cells, and it can be minimized by the rational design of the flow field. With the development of this reactant-transport approach, we are on the path to scale-up and deployment.Zhongyang Wang, lead author

The technology and its underpinnings are the subject of patent filing and are available for licensing.

The borohydride is probably dissolved in water,
it is not clear how it is reused.

Excellent news for FCs but a potential dagger to the heart of H2.