Volkswagen will offer a plug-in hybrid drive generating 160 kW (218 PS) for the updated Arteon product line for the first time, in addition to offering TSI (gasoline) and (in some markets) TDI (diesel) options.

The Arteon has been the Volkswagen Gran Turismo since 2017. Volkswagen is now unveiling a far-reaching update to the MQB-based model series, including the introduction of two models: Fastback and Shooting Brake. 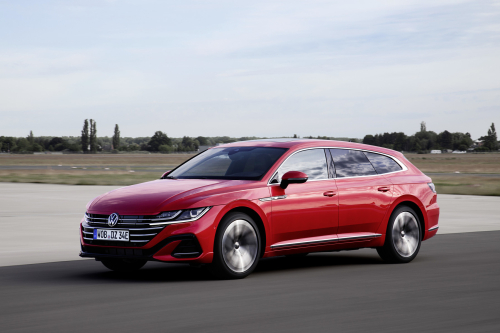 The two new models are both characterized by athletic lines but differ significantly from each other from the B-pillars to the rear. Whereas on the fastback model, the roof and window contours are swept down in parallel from the B-pillars and therefore become part of the coupé-shaped rear, the roof and window lines are extended towards the rear on the Shooting Brake and end in the new roof spoiler.

At the top, the window line runs parallel to the roof. However, at the bottom the lines move upwards towards the D-pillars, thus making the window area at the rear narrower and more striking. All elements together form the sporty rear profile typical for a Shooting Brake. 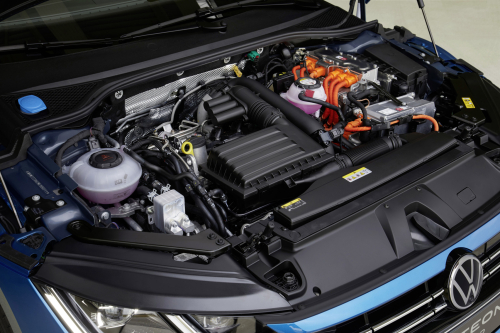 All new technical developments are applied in both body versions. For the first time in the Arteon, this includes a plug-in hybrid drive comprising a 1.4-liter TSI engine paired with an electric motor and fed by a 12.7 kWh battery. With the 34-mile all-electric range, many Arteon eHybrid and Arteon Shooting Brake eHybrid drivers will be able to cover their daily driving distances with zero emissions locally.

The Arteon R will be the flagship in the model series. With this model, Volkswagen is pushing further into the premium performance segment. It is not just the unadulterated output, but also the way that the vehicles convert their power into propulsion.

Using a new progressive technology known as R-Performance Torque Vectoring, the torque is distributed variably both between the axles and also between the rear wheels depending on the driving situation by means of selective wheel torque control. This creates a new level of driving dynamics in this category.

The range of technical innovations involves further IQ.DRIVE assist systems as well as powertrains. New in this product line: the optional Travel Assist system. The system enables partly automated driving within a speed range from 0 km/h to 210 km/h (within the system limits). Travel Assist makes driving in stop-and-go traffic and through roadworks in particular noticeably more convenient.

An integral part of Travel Assist is the ACC with predictive speed control. The adaptive cruise control reacts to speed limits, towns, bends, roundabouts and junctions with corresponding speed adaptation. The Lane Assist lane keeping system that keeps the vehicle in the centre of the lane and Autonomous Emergency Braking Front Assist with Pedestrian Monitoring also form part of the range of Travel Assist functions.

The Rear View reversing camera (optional) was further enhanced and now also features among other things a Corner View (which expands the camera image on the infotainment system screen from 90 degrees to a wide angle of 170 degrees) and a special trailer view (of the tow bar from above to facilitate hitching up the trailer).

With the 34-mile all-electric range, many Arteon eHybrid and Arteon Shooting Brake eHybrid drivers will be able to cover their daily driving distances with zero emissions locally.

And also zero liquid fuel consumption.  This replaces petroleum with a mix of other energy sources which is almost petroleum-free, worldwide.  Further, the range allows once-daily charging for most drivers.  This in turn allows the car to be used as a demand-side management asset, soaking up temporary power surpluses such as PV generation peaks or second-by-second imbalances for grid regulation.

Replacing petroleum consumed at perhaps 35% efficiency with a mix of natural gas put through CCGTs at 60+% efficiency plus some nuclear and "renewables" cuts emissions of all kinds, both criteria emissions and GHGs.  To meet even 2030 goals, every vehicle produced should be a PHEV like this Arteon.

We are on our 3rd Camry Hybrid with not enough e-range.

It continuously surprises me that the VW group always seems to pair the "old" 1.4-liter TSI engine with plug-in hybrid drivelines and not the modern 1.5-liter TSI engine with Miller System (or the VW denotation for it, if you prefer...). The 1.5 engine has higher efficiency, particularly at high loads, and with hybrid drive, you tend to run the engine at a higher load to gain efficiency. Moreover, a larger engine size normally leads to lower efficiency on low load, due to increased friction losses, but this is particularly what a hybrid drive tries to avoid, as indicated above. It is as if you would say that VW tries to avoid the optimal solution. I would love to hear their comments on this.

Nice-looking design, better looking than a typical SUV or CUV, and better aerodynamic.
IMHO, perhaps the 1.4-TSI engine was chosen over the 1.5 TSI Millerized due to higher power of the 1.4 at 156 hp vs 128 hp of the 1.5 Millerized, and lower cost for the 1.4, because the 1.5 is a more complicated engine with more advanced variable valve and cylinder deactivation for higher part-load efficiency, which is not needed in a PHEV.