OCTA board approves draft plan for conversion to 100% zero-emission bus fleet by 2040; testing fuel-cell and battery-electric

The Orange County Transportation Authority board has approved a draft plan outlining how the agency will convert the OC Bus fleet to 100% zero-emission technology by 2040. OCTA’s zero-emission bus rollout plan will now be submitted to the California Air Resources Board.

OCTA has already gradually transitioned its fleet over the years, from diesel-burning buses to clean-burning renewable compressed natural gas (CNG) buses with near-zero-emission engines. The state has set a requirement to transition to complete zero-emission transit within the next 20 years.

The plan is not a commitment to a specific type of technology at this point. OCTA is in the process of testing both hydrogen fuel-cell electric buses and plug-in battery-electric buses to determine which technology best meets OCTA’s needs related to operations, maintenance and cost, among other things. 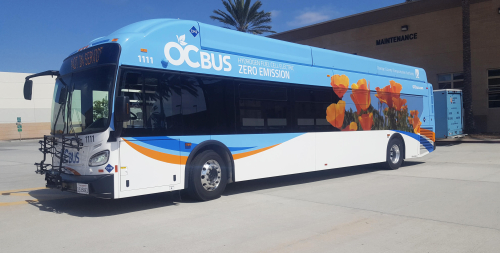 In April, the OCTA Board of Directors approved a request for quotes to purchase 10 plug-in battery-electric buses.

The pilot program for the battery-electric 40-foot buses comes following OCTA’s debut at the start of 2020 of 10 new hydrogen fuel-cell electric buses.

Those hydrogen fuel-cell buses began operating in January, when OCTA debuted its hydrogen fueling station in Santa Ana. In all, it represented a $22.9-million investment.

More than half of that funding—$12.5 million—came from California Climate Investments, a statewide initiative that puts billions of cap-and-trade dollars to work reducing greenhouse gas emissions, strengthening the economy and improving public health and the environment, particularly in disadvantaged communities.

Testing both hydrogen fuel-cell and plug-in battery-electric buses will allow OCTA to collect valuable data and to determine which technology—or the best mix of technologies—to pursue moving forward.

OCTA operates more than 500 buses in the regular OC Bus system across Orange County. For now, most of those buses run on compressed natural gas but OCTA is working toward the goal of producing zero emissions.

OCTA will begin phasing in the purchase of zero-emission buses as part of future bus procurements beginning in 2023. At the same time, staff will continue to analyze emerging technologies and work with partners to secure funding for purchase, operations and maintenance of the buses.

The effort aligns with California’s Innovative Clean Transit Rule, which sets a goal for public transit agencies to transition gradually to 100% zero-emission bus fleets by 2040.

The hydrogen fuel-cell buses continue to be tested on routes throughout Orange County. The plug-in battery-electric buses are expected to begin operation in Orange County in late 2021.

I am not sure how long some of the Orange County bus routes are but I believe that they would be better off buying more BEV buses as the BEV buses are approximately twice as energy efficient and cost less to purchase and maintain. Batteries are getting better faster than fuel cells so by 2030, the BEV buses should be able to cover all of the Orange County routes if they can not do that already. Proterra offers buses with over 300 miles of range but that would be diminished if there were significant freeway driving.

It does not have to be either/or, longer routes can use FC.