The Manufacturers of Emission Controls Association (MECA) released a new report quantifying a county level MOVES emissions inventory in the continental US (CONUS) 48 states and subsequent air quality modeling report of a potential scenario should the US EPA Cleaner Trucks Initiative (CTI) be finalized as a national program at the emission limits proposed by CARB in their heavy-duty omnibus regulation.

The objective of the emission impact analysis was to respond to EPA’s request for comments as to the merits of reducing NOx emissions from heavy-duty trucks by 50 to 90% as outlined in the 6 January 2020 Advance Notice of Proposed Rulemaking (ANPR) of the CTI.

On 6 March 2020, the California Air Resources Board (CARB) proposed to set an intermediate FTP NOx emissions limit of 50 mg/bhp-hr in model years 2024-2026 with a final FTP standard of 20 mg/bhp-hr in 2027, representing a 90% reduction below today’s standard of 200 mg/bhp-hr. The emission limit values and increased durability requirements as proposed by CARB served as the basis for the assumption’s scenario should EPA’s CTI be finalized nationally at the same levels.

The base year was selected as 2028 and the modeled year of 2035 was chosen to allow seven years of phase-in of low NOx trucks meeting the future modeled CTI scenario emission limits while still providing adequate confidence from an air quality perspective. Later years should show additional improvements as greater fleet turnover occurs.

The NOx emissions analysis demonstrated substantial national NOx reductions. The 2035 MOVES inventory impact analysis, representing only the first 11 model years of more stringent standards (only eight of which are at the 20 mg/bhp-hr final standard), yields an average estimated 36.2% reduction in on-road NOx emissions or about 330,000 tons of NOx in the year 2035. 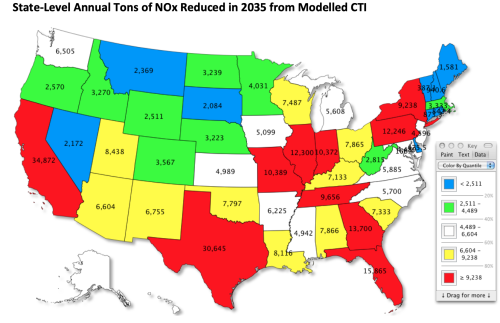 The modeled 2028 base year 8-hour ozone design values were found to be above the 70 ppb NAAQS for 75 monitoring locations. Applying the potential CTI strategy to the 2028 base year results in the following observations:

Finally, the technical work at Southwest Research Institute (SwRI) has demonstrated the feasibility of achieving the assumed limits modeled in this work. MECA estimated the cost effectiveness of these mobile source NOx reductions to be in the range of $1,000 to $5,000 per ton of NOx reduced.

Founded in 1976, MECA is a national association of companies that manufacture a variety of emission control technologies for cars, trucks, buses, and off-road vehicles and equipment, as well as stationary internal combustion engines.