Fewer wild animals, including threatened mountain lions, are becoming roadkill during shelter-in-place orders, according to a study on three states from the University of California, Davis.

Using traffic and collision data collected from California, Idaho and Maine, the researchers found that wildlife-vehicle conflict has declined by 21-56 percent from early March to mid-April, following government stay-at-home orders. 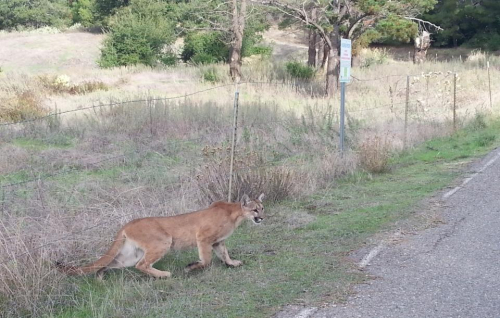 This respite, if it continued, could amount to about 5,700 to 13,000 fewer large mammals killed each year in those states alone, and 50 fewer mountain lion deaths per year in California.

The report, published on the UC Davis Road Ecology Center website, is the first evidence that wildlife-vehicle conflict decreased along with reduced travel during the COVID-19 response.

There is a statistically significant decline in wildlife deaths on highways in all three states following reductions in traffic this spring. This has not been the case for any of the previous five years for these three states. If anything, there is usually an increase in spring.

Traffic on all roads—not just state highways—in California decreased 71% during the study period. Before stay-at-home orders, 8.4 large wild animals per day were killed by vehicles in California. After the order, the number fell 21% to 6.6 animals.

Mountain lion deaths in particular showed large decreases. At a time when the state is considering permanent legal protection for the animals throughout California, 56% fewer mountain lions were killed between the 10 weeks before stay-at-home orders compared to the 10 weeks after.

The reduction in numbers of wildlife killed is surprising, and is a silver lining for both wildlife and people at this difficult time. For Southern California mountain lions, even one lion making it across a road instead of being killed can be very significant for populations like the ones in the Santa Monica or Santa Ana mountain ranges.

In April, the state granted temporary protective status to mountain lions in Southern California. Cougars in the Santa Ana and Santa Monica mountains are isolated from other populations by freeways. The resulting low genetic diversity combined with mortality on roads put them at risk of local extinction, according to UC Davis and other research. Measures underway to reconnect these populations of lions with others in the state include underpasses, wildlife fencing and proposed land bridges across busy freeways.

Traffic on all roads in Idaho decreased up to 63% during the study period. Before stay-at-home orders, 8.7 large wild animals were killed daily by vehicles in Idaho. After the order, the number fell 38% to 5.4 animals per day.

In Maine, travel on all roads decreased up to 73 percent during the study period. Before shelter-in-place directives, 15.2 large wild animals were killed daily on Maine roads. After the order, the number was reduced by nearly half, to 8.4 animals.

As more restrictions lift, traffic is on the rise again. The states analyzed in the report have experienced a two- to three-fold increase in traffic in recent weeks, and traffic is now about half of pre-order levels. Shilling will continue to watch closely for related impacts to wildlife.

Given the five- to 10-fold under-reporting of large animals involved in collisions with vehicles and the lack of systematic reporting of smaller animals killed on roads, the positive impacts we report are likely to be just the tip of the iceberg of reduced deaths of wildlife on US roads and highways.

This is the fourth special report for the Road Ecology Center regarding the traffic-related impacts of shelter-in-place orders. Additional recent reports cover the impacts of COVID-19 mitigation on traffic accidents, greenhouse gas emissions and fuel tax revenues.