The US Army Contracting Command–Detroit Arsenal announced that GM Defense LLC, a subsidiary of General Motors, has been awarded the production contract to build, field and sustain the Army’s new Infantry Squad Vehicle (ISV). The total production ISV contract award value is $214.3 million to procure the initial Army Procurement Objective of 649. The approved Army Acquisition Objective is 2,065 vehicles. 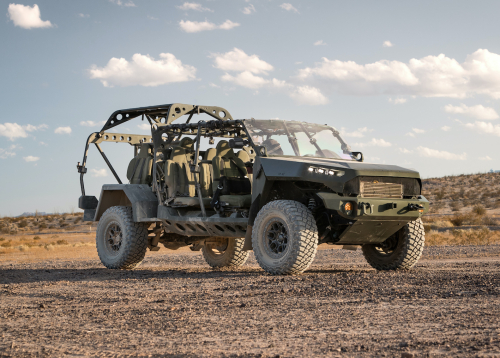 Designed to provide rapid ground mobility, the expeditionary ISV is a light and agile all-terrain troop carrier intended to transport a nine-Soldier infantry squad moving throughout the battlefield. The ISV is light enough to be sling-loaded from a UH-60 Blackhawk helicopter and compact enough to fit inside a CH-47 Chinook helicopter for air transportability.

GM Defense’s solution to the Army’s next-generation transportation needs is based off the 2020 Chevrolet Colorado ZR2 midsize truck architecture and leverages 90% commercial off-the-shelf parts. These parts include the Multimatic dual spool-valve dampers and Chevrolet Performance suspension components. The durability and performance of those components have been proven in the grueling Best in the Desert race series, where Colorado is one of only four vehicles to complete 11 consecutive races (out of a total of 434 competitors).

As a result, GM Defense can deliver an ISV with world class manufacturing efficiencies, ease of maintenance and a well-established global supply chain. All ISV models will be equipped with an occupant and cargo superstructure powered by a 186-horsepower, 2.8L Duramax turbo-diesel engine, and six-speed automatic transmission.

In 2019, GM Defense partnered with Ricardo Defense after the US Army awarded three $1 million contracts to competing industry providers to develop ISV prototypes for testing, evaluation and down-selection for the production contract. Ricardo Defense will support key product logistics and fielding requirements of the GM Defense ISV.

The STRYKER is extremely effective and from the looks, much safer
- why the switch?

This is a light weight vehicle, relatively low cost, and relatively fuel efficient that can be helicopter delivered. It will probably rely partially on speed instead of armor for protection.

Only 2.8 Liters! Good-Old-Boys would be embarrassed to be seen in one.

STRYKER is big, heavy and expensive.

This expeditionary ISV is a light and agile all-terrain troop carrier,
it is NOT meant to replace the M1126 Stryker an eight wheeled, armored personnel carrier that weighs 20 tons.
It is similar to the Lightweight Tactical All Terrain Vehicles (LTATV) based on the Polaris MRZR-4 and used by Special Operations Forces (SOF).
One thing SOF like to do is take a commercial pickup add armor, CS4ISR equipment, and off-road suspension. Almost like an insurgents "Technical".
This vehicle would not take much to add such a kit, making it look like a Chevrolet Colorado ZR2 off-road truck. Check out this story on "War Zone, the Drive" (https://www.thedrive.com/the-war-zone/19062/us-special-operators-want-a-super-technical-that-transforms-into-different-civilian-trucks).