Xpeng Motors has begun China-wide delivery of its new P7 super-long range, high-performance, smart EV sports sedan to customers. This follows the receiving of the official production license on 19 May from China’s Ministry of Industry and Information Technology for its new own-built, wholly-owned factory, the Zhaoqing Xpeng Motors Intelligent Industrial Park, in Xpeng’s home Guangdong Province. 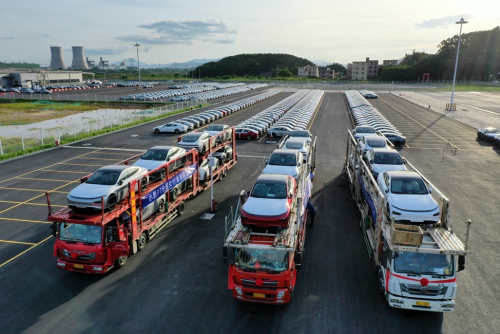 Production of the P7 at Xpeng’s Zhaoqing plant is ramping up to meet demand, with an annual capacity of 100,000 units.

The delivery of the P7 is a major step toward realizing the company’s ambition to create an end-to-end in-house intelligent manufacturing ecosystem and value chain, from homegrown R&D and IP creation, through design and development, to manufacturing and rollout, complemented by direct as well as authorized sales network, after-sales services and customer support.

The P7 is designed and built with four goals: Drive further. Charge quicker. Accelerate faster. Control smoother. It has already been very well received by the Chinese public following a series of multi-city test drives over the past couple of months.

At 706 km (439 miles) (NEDC), the standard rear-wheel drive super-long range version of the P7 has the longest driving range among production EVs in China. The P7’s in-house designed 3-in-1 electric drive system is the most powerful permanent magnet synchronous motor in China’s EV market, with maximum motor efficiency reaching 97.5%, and the world’s first to be equipped with the Infineon 950 IGBT module.

Xpeng collaborated with CATL to develop the P7’s prismatic lithium NCM cells. As a result, the P7’s ultra-thin high-performance battery pack is only 110mm in height, reaching 170 Wh/kg energy density to store close to 81 kWh of power with super-low drag coefficient of Cd0.236.

The P7 is the first production car to be powered by NVIDIA’s DRIVE Xavier system-on-a-chip, delivering 30 trillion operations per second, 12 times more powerful than the chips in most competing brands. Its Xmart OS 2.0 hardware uses Qualcomm’s top-line Snapdragon 820A vehicle processor, the most powerful in production cars.

The P7 is available through Xpeng’s growing 190-store sales and service network, including 99 experience centers, 64 service centers and 27 sales outlets across 57 cities in China.

Xpeng’s contracted and signed supercharging stations have expanded to 199 stations across 61 cities, while its supporting 3rd-party charging networks exceeded 200,000 units across China.

With 350KW fast charging, a CATL battery which should give very high cycle life without dropping much in capacity, level 2 autonomy and level 3 promised by Christmas with no fake claims of FSD, and a really, really luxurious interior why would anyone in China choose the Model 3 for around the same price?

" level 3 promised by Christmas with no fake claims " What do you say we just wait and see. Until then it is all conjecture.

It's remarkable how many new players are coming from everywhere with innovative products in a field that traditionally have been so "boring".
I'm wondering how it will be in 5 years time... any guesses? :)