Volkswagen Group of America (VWGoA) welcomed its first overseas liquid natural gas (LNG) transport ship to the VWGoA port in Davisville, RI. The LNG-powered car carrier ship, named Siem Confucius, left Emden, Germany on 16 June 2020 on its first voyage, which includes one stop in the US before heading to the Gulf of Mexico. (Earlier post.) This is the company’s first in-service overseas carrier to operate on LNG. 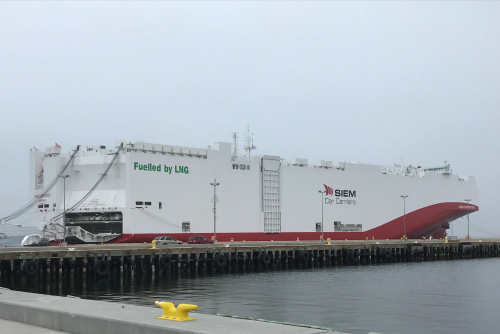 The Siem Confucius is one in a pair of first-time trans-Atlantic LNG-fueled car carriers that Volkswagen Group and Siem Car Carriers AS unveiled in November 2019. Powered by LNG, the new carriers help reduce CO2 emissions. This is an important piece of the Group’s global decarbonization strategy.

Both ships have 13 car decks and the capacity to carry up to 4,800 Volkswagen Group vehicles at a time. The ship’s liquified gas tanks have a capacity of approximately 475,000 gallons each, which is enough for a complete round trip of the company’s standard 12,000-nautical mile America Round Tour shipping route.

The new carriers will replace two of the original nine in the current fleet.