Volkswagen has premiered the new Tiguan, now available with a plug-in hybrid drive option for select markets (not including the US), the Tiguan eHybrid. (Earlier post.) 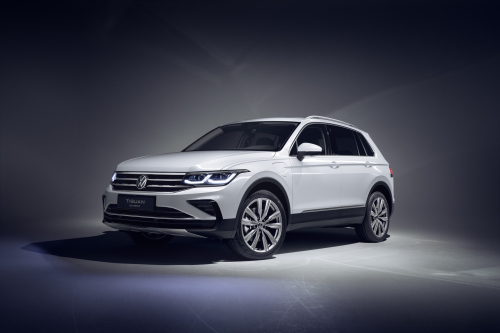 The Volkswagen Tiguan is Europe’s most successful Sports Utility Vehicle and one of the top-selling SUVs in the world. More than six million units have been produced to date. In 2019, the Tiguan was again the most popular model of the brand and entire Volkswagen Group, with around 911,000 units produced. Volkswagen is now showcasing a comprehensive update of the best-selling vehicle.

In addition to electrifying the Tiguan with a new, plug-in hybrid drive, Volkswagen is introducing a separate Tiguan R model for the first time. Volkswagen R’s performance experts have developed a new all-wheel drive with selective wheel torque control for the extremely dynamic, top-of-the-range model. The “R-Performance Torque Vectoring” enables new SUV driving dynamics by distributing the drive power variably between the front and rear axles as well as the left and right rear wheels.

Volkswagen’s use of twin dosing now ensures that the turbo diesel engines (TDI) in the Tiguan are among the cleanest combustion engines in the world. With the new Travel Assist system in the Tiguan, the compact SUV is now capable of assisted driving at speeds up to 210 km/h (130 mph).