Researchers at the University of Oregon have advanced the effectiveness of the catalytic water dissociation reaction in bipolar membranes. The work, published in the journal Science, provides a roadmap to realize electrochemical devices that benefit from the key property of bipolar membranes operation—to generate the protons and hydroxide ions inside the device and supply the ions directly to the electrodes to produce the final chemical products.

Bipolar membranes (BPMs) consist of a copolymeric cation-exchange layer (CEL) with fixed anionic groups and mobile cations, in contact with an anion-exchange layer (AEL) with fixed cationic groups and mobile anions. When a sufficient bias is applies across a BPM, heterolytic water dissociation (WD), H2O → H+ + OH-, occurs at the AEL/CEL interface with the H+ driven through the CEL and the OH- driven through the AEL. 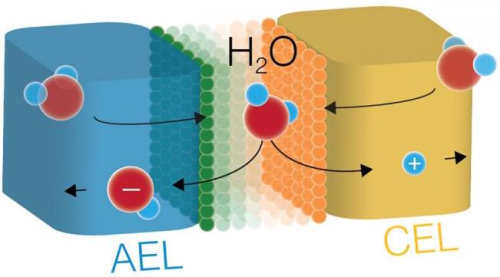 The three-member team used a membrane-electrode assembly in which the polymer bipolar membrane is compressed between two rigid porous electrodes, allowing them to make a large number of bipolar membranes with different water dissociation catalyst layers.

The technology behind bipolar membranes, which are layered ion-exchange polymers sandwiching a water dissociation catalyst layer, emerged in the 1950s. While they’ve been applied industrially on a small scale, their performance is currently limited to low current-density operation, which hampers broader applications.

Among such applications are devices to produce hydrogen gas from water and electricity, capture carbon dioxide from seawater, and make carbon-based fuels directly from carbon dioxide, said co-author Shannon W. Boettcher, a professor in the UO’s Department of Chemistry and Biochemistry and founding director of the Oregon Center for Electrochemistry.

I suspect our findings will accelerate a resurgence in the development of bipolar-membrane devices and research into the fundamentals of the water-dissociation reaction. The performance we demonstrated is sufficiently high. If we can improve durability and manufacture the bipolar membranes with our industry partners, there should be important immediate applications.

Typically, water-based electrochemical devices such as batteries, fuel cells and electrolyzers operate at a single pH across the whole system; the system is either acidic or basic, said the study’s lead author Sebastian Z. Oener, a postdoctoral scholar supported by a German Research Foundation fellowship in Boettcher’s lab.

Often, this leads either to using expensive precious metals to catalyze electrode reactions, such as iridium, one of the rarest metals on earth, or sacrificing catalyst activity, which, in turn, increases the required energy input of the electrochemical reactor. A bipolar membrane can overcome this trade-off by operating each electrocatalyst locally in its ideal pH environment. This increases the breath of stable, earth-abundant catalyst availability for each half-reaction.

The three-member team, which also included graduate student Marc J. Foster, used a membrane-electrode assembly where the polymer bipolar membrane is compressed between two rigid porous electrodes. This approach allowed them to make a large number of bipolar membranes with different water dissociation catalyst layers and accurately measure the activity for each.

The biggest surprise was the realization that the performance could be improved substantially by layering different types of catalysts on top of each other. This is simple but hadn’t been explored fully.

A second key finding, Oener said, is that the water dissociation reaction occurring inside the bipolar membrane is fundamentally related to that which occurs on electrocatalyst surfaces, such as when protons are extracted directly from water molecules when making hydrogen fuel in basic pH conditions.

This is unique because it has not before been possible to separate the individual steps that occur during an electrochemical reaction. They are all linked, involving electrons and intermediates, and rapidly proceed in series. The bipolar membrane architecture allows us to isolate the water dissociation chemical step and study it in isolation.

That finding, he said, also could lead to improved electrocatalysts for reactions that directly make reduced fuels from water, such as making hydrogen gas or liquid fuel from waste carbon dioxide.

The discoveries, Boettcher said, provide a tentative mechanistic model, one that could open up the field and motivate many more studies.

The co-authors are seeking a patent for the bipolar membrane technology they developed. The National Science Foundation's Chemical Catalysis Program supported the research.

"...make carbon-based fuels directly from carbon dioxide..."
This is the idea, get CO2 from the sea, make fuels and sell oxygen.