A record 53.6 million metric tonnes (Mt) of electronic waste was generated worldwide in 2019, up 21% in just five years, according to the UN’s Global E-waste Monitor 2020. 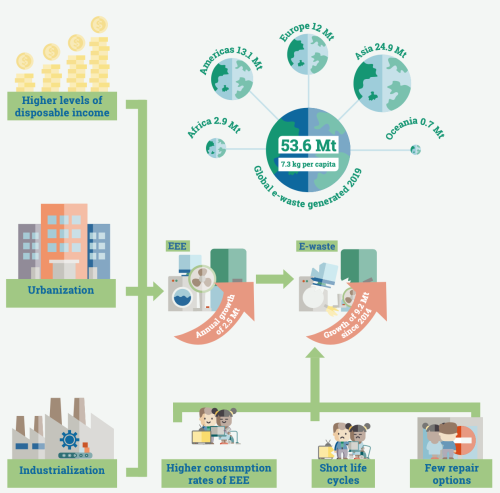 The new report also predicts that global e-waste (discarded products with a battery or electrical plug) will reach 74 Mt by 2030—almost a doubling of e-waste tonnage in just 16 years. This makes e-waste the world’s fastest-growing domestic waste stream, fueled mainly by higher consumption rates of electric and electronic equipment, short life-cycles, and few options for repair.

Only 17.4% of 2019’s e-waste was collected and recycled. This means that gold, silver, copper, platinum, and other high-value, recoverable materials conservatively valued at US $57 billion—a sum greater than the Gross Domestic Product of most countries—were mostly dumped or burned rather than being collected for treatment and reuse.

For perspective, last year’s e-waste weighed substantially more than all the adults in Europe, or as much as 350 cruise ships the size of the Queen Mary 2, enough to form a line 125 km long.

E-waste is a health and environmental hazard, containing toxic additives or hazardous substances such as mercury, which damages the human brain and/or coordination system.

Other key findings from the Global E-waste Monitor 2020:

The Global E-waste Monitor 2020 is a collaborative product of the Global E-waste Statistics Partnership (GESP), formed by the United Nations University (UNU), the International Telecommunication Union (ITU), and the International Solid Waste Association (ISWA), in close collaboration with the UN Environment Programme (UNEP). The World Health Organization (WHO) and the German Ministry of Economic Cooperation and Development (BMZ) also substantially contributed to this year’s Global E-waste Monitor.