A team of researchers at Carnegie Mellon University (CMU) has used a vehicle dynamics model to evaluate the trade-off between automation and electric vehicle range and battery longevity. The researchers compared vehicle-level energy use, range and battery life of a vehicle equipped to attain Society of Automotive Engineers (SAE) levels 4–5 automation to human-driven EVs by undertaking a careful consideration of the effect on vehicle-level energy use of the different components needed for automated driving, as well as the potential increase in drag from LiDAR (light detection and ranging).

They found that automation will likely reduce electric vehicle range by 5–10% for suburban driving and by 10–15% for city driving. The effect on range is strongly influenced by sensor drag for suburban driving and computing loads for city driving. They also found that the impact of automation on battery longevity is negligible. Their paper is published in Nature Energy. 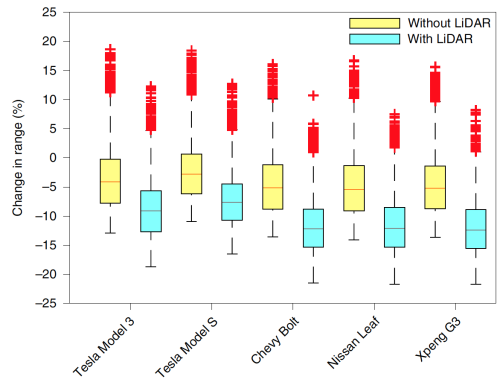 Box plot showing the range impact for the composite drive profile and for automated solutions with and without LiDAR. The y axis shows the percentage change in range for the AEV compared to the base EV. The horizontal red line is the median change in range, and the red data points are the data that are beyond the whisker where the maximum whisker length is 1.5 times the interquartile range. The x axis lists the five EVs considered in the analysis. Mohan et al.

While some commentators have suggested that the power and energy requirements of automation mean that the first automated vehicles will be gas–electric hybrids, our results suggest that this need not be the case if automakers can implement energy-efficient computing and aerodynamic sensor stacks.

Two of the researchers had developed a physics-based vehicle dynamics model to estimate the energy demands of an EV given a realistic driving profile. Using a realistic velocity profile with a 1 s temporal resolution the model calculates the instantaneous power needed each second to overcome vehicle inertia, aerodynamic drag and road friction.

The CMU team extended the model for autonomous electric vehicles (AEVs) by adding the weight of the different components to the mass of the vehicle and battery pack, and increasing the drag coefficient for automated solutions with a roof-based spinning LiDAR.

If no LiDAR is used, or if solid-state LiDAR that is incorporated into the aerodynamic profile of the vehicle is used, the increase in drag is zero. They also modified the velocity profile to account for potentially smoother driving and add the computing and sensor loads at each second.

Keeping track of the total energy used, they repeated the driving profile until the battery was fully depleted. They then compared the resulting range estimates for a given battery capacity to conventional EVs.

All underlying data are publicly available at https://github.com/battmodels/Automation-EV-Range. Source data are provided with the paper.

I am sure they are more concerned about getting the autonomous driving working at all (or rather, safely) before they streamline the lidar.
Ditto, the power consumption.
Once they get the systems working properly, they'll start to worry about power consumption and put the code into asics (which is expensive and slow, compared to C code or fpgas).