In an open-access study in the EGU journal Atmospheric Chemistry and Physics, an international team of researchers reports that the greenhouse gas sulfur hexafluoride (SF6) is rapidly accumulating in the atmosphere, driven by the demand for SF6-insulated switchgear in developing countries. 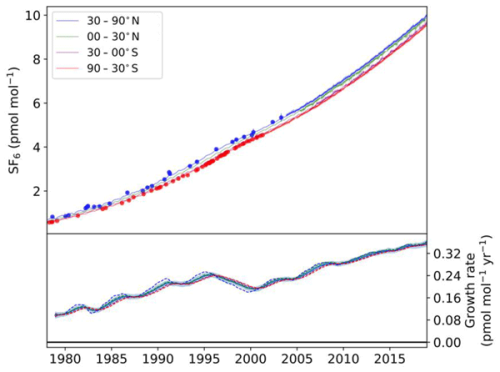 Of all the greenhouse gases regulated under the Kyoto Protocol, SF6 is the most potent, with a global warming potential (GWP) of 23,500 over a 100-year time horizon. In practical terms, this high GWP means that 1t of SF6 released to the atmosphere is equivalent to the release of 23,500t of carbon dioxide (CO2). However, the low atmospheric mixing ratio of SF6 relative to CO2 limits its current contribution to total anthropogenic radiative forcing to about 0.2%. Nevertheless, with a long atmospheric residence time of 3200 years, almost all the SF6 released so far will have accumulated in the atmosphere and will continue to do so.

… Since the 1970s, SF6 has been used mainly in high-voltage electrical equipment as a dielectric and insulator in gas-insulated switchgear, gas circuit breakers, high-voltage lines, and transformers. Sales compiled from 1996–2003 by producers in Europe, Japan, USA, and South Africa (not including China and Russia) showed that, on an annual average basis, 80% of the SF6 produced during this period was consumed by electric utilities and equipment manufacturers for electric power systems.

Peter Simmonds at the University of Bristol, UK, and his colleagues calculated annual emissions of SF6 between 1978 and 2018. The researchers drew on measurements from a global network of air-monitoring sites and archived air samples.

We show that changing patterns in SF6 consumption from developed (Kyoto Protocol Annex-1) to developing countries (non-Annex-1) and the rapid global expansion of the electric power industry, mainly in Asia, have increased the demand for SF6-insulated switchgear, circuit breakers, and transformers. The large bank of SF6 sequestered in this electrical equipment provides a substantial source of emissions from maintenance, replacement, and continuous leakage.

Between 2008 and 2018, annual emissions of the gas increased by about 24% to around 9,000 tonnes a year. The rise reflects an increased demand for electrical equipment, especially in countries that are not bound by the Kyoto Protocol.