Volvo robotaxis are rolling out in suburban Shanghai as part of a pilot program from China’s dominant ride-hailing platform, Didi Chuxing. Since Saturday, users of Didi’s app aged 18 to 70 have been able to sign up for a free test drive. 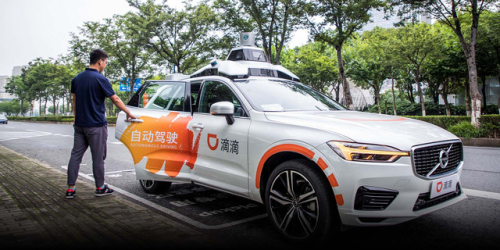 Currently, Didi’s robotaxi service includes a human driver at the wheel, ready to take over in unexpected situations. The robotaxis are equipped with cameras and sensors, which allow them to see nearby traffic, as well as monitor a conventional vehicle’s blind spots.

The cars all follow the same route: a 6-kilometer loop from the Shanghai Automobile Exhibition Center to a nearby hotel. But the company plans to gradually roll out its on-demand autonomous service over a larger area in Jiading, where Shanghai’s main autonomous driving zone is located.

Shanghai is our main trial site, and we have dispatched over 100 self-driving taxis in several places around the globe, including California.

While Didi is the first ride-hailing company to roll out a robotaxi service in Shanghai, a few companies launched similar services in other Chinese cities earlier this year. Tech giant Baidu introduced 45 of its robotaxis in the central city of Changsha in March, and Momenta, a startup backed by Baidu rival Tencent, has announced plans for a robotaxi test run in Beijing this fall.

The governments of other Chinese metropolises, including Guangzhou and Chongqing in the south of the country, have greenlighted open-road testing for autonomous cars.

The goal of robotaxis is to eliminate the need for human drivers, which is how we can cut costs and make profits. But currently, no company can do this.

According to an April report from China EV100, a nonprofit think tank, the cost of an unmanned taxi is currently around $100,000 more than a regular taxi. The spinning sensor, which is used to detect traffic conditions, can cost tens of thousands of dollars by itself, Yang said.

The report said that as technology develops, the cost of operating robotaxis could fall below that of conventional taxis by 2027—and if this happens, it will “revolutionize transportation services.”

I can see robo for delivery, maybe passengers later.