Audi presented the Q4 e-tron concept at the 2019 Geneva Motor Show as a preview of the first compact electric SUV from Audi. (Earlier post.) With the Q4 Sportback e-tron, the brand is now presenting the second model of the product line that will go into production in 2021 as an SUV Coupé, and will be the Audi brand’s seventh electric model.

Versatile efficiency technologies enable ranges of up to more than 500 kilometers (310.7 miles) 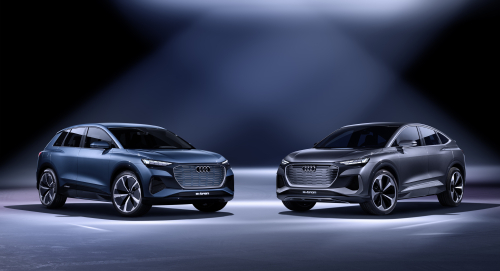 This gives potential Q4 customers the opportunity to start thinking about which version they prefer roughly a year before the first vehicles will be delivered: the versatility and robustness of the classic SUV or the elegance of the Coupé variant. The dimensions of the two Q4 models are almost identical: With an exterior length of 4.60 meters (15.1 ft) and a height of 1.60 m (5.2 ft), the Sportback is one centimeter (0.4 in) longer and flatter. The Q4 variants are identical in terms of their width of 1.90 m (6.2 ft) and their wheelbase of 2.77 meters (9.1 ft).

The two concept cars, which are already offering a clear look ahead at the top-of-the-range engine line-up of the coming series production model, also have the same drive technology. Two electric motors mobilize 225 kW of system output in the Q4 and Q4 Sportback e-tron concept. As is typical for Audi, the driving power is brought to the road with quattro all-wheel drive. Both versions of the Q4 accelerate from zero to 100 km/h (62.1 mph) in 6.3 seconds. Top speed is restricted to 180 km/h (111.8 mph).

An 82 kWh battery takes up almost the entire space in the underbody area between the axles. The range is more than 450 kilometers (279.6 mi)—in line with the WLTP standard. Versions with rear-wheel drive will offer a range of more than 500 kilometers (310.7 mi) in accordance with WLTP.

The technology of the Q4 e-tron concept is provided by the modular electrification platform (MEB), which will be integrated in numerous electric vehicles produced by the Volkswagen Group in the future, from the compact class to the superior medium-size class.

The MEB offers a broad range of drive variants and power levels. The performance version of the electric drive is installed in the Audi Q4 Sportback e-tron concept. The front and rear axles are each powered by an electric motor—this Q4 Sportback is a quattro. There is no mechanical connection between the axles. Instead, an electronic control ensures that the torque distribution is coordinated optimally, and it does so in fractions of a second.

In most cases, the Q4 Sportback e-tron concept mainly uses its rear electric motor, a permanently excited synchronous motor, in order to achieve the highest efficiency. For reasons of efficiency, the drive torque is generally distributed with a rear-axle bias.

If the driver demands more power than the rear electric motor can supply, the electric all-wheel drive uses the front asynchronous motor to redistribute the torque as required to the front axle. This also happens predictively even before slip occurs in icy conditions or when cornering fast, or if the car understeers or oversteers.

The battery can be charged with a maximum of 125 kilowatts. It therefore takes little more than 30 minutes to reach 80% of the total capacity.

The Audi Q4 Sportback has a drag coefficient of 0.26—0.01 below that of the Q4 e-tron SUV. The compact electric product line also features a sophisticated recuperation strategy. The complex thermal management of the drive and battery, which involves a CO2 heat pump, also contributes to this.

Sporty, precise handling. A key factor for the sporty character and outstanding transverse dynamics is the low and central position at which the drive components are installed. The high-voltage battery system is matched to the dimensions of the Audi Q4 Sportback and is located between the axles in the form of a flat, broad block beneath the passenger compartment. The battery system weighs 510 kilograms (1,124.4 lb). The center of gravity of the Audi Q4 Sportback e-tron concept is therefore at a similar level to that of a sedan with a conventional drive system.

Axle load distribution is balanced at almost 50:50. The front wheels of the Q4 Sportback e-tron concept are guided on a MacPherson axle with adaptive dampers. In the rear, there is a multi-link axle with separate springs and adaptive dampers.

The modular electrification platform MEB: the base. The MLB and MQB component systems for vehicle development represent a great success story in all segments of Audi and the Volkswagen Group. Previous platforms were designed primarily for the use of combustion engines. The MEB was designed specifically and exclusively for automobiles with electric drive systems. Axles, drives, wheelbases and the interaction between all components are selected and adapted specifically for e-mobility.

The placement of the large-volume battery units and their geometry can therefore be optimized without having to make concessions to other drive concepts that must always be taken into account in the MLB and MQB.

At the same time, the MEB opens up a huge synergy potential. This platform serves as the basis primarily for electric cars in the high-volume A segment. It allows the best technology available to be developed jointly across brands and used in many different electric cars. The MEB thus also helps electric mobility to break through even in the particularly price-sensitive compact segment.