Although large emissions cuts are urgently needed to achieve global climate goals, it may take decades before we can measure the effect of the reductions on global temperature evolution, according to a new study by researchers at Norway’s CICERO Center for International Climate Research. 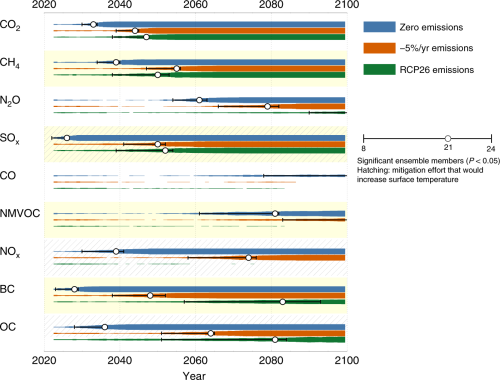 Their results show that if we only use the Earth’s surface temperature to measure whether emissions cuts lead to a slow-down in global warming, we may need to wait for decades before we can establish with certainty the temperature effect of the reduced emissions.

This is partly because the Earth’s climate responds slowly to changes in emissions, and partly because of the substantial natural variability in annual mean temperatures.

Over the past 50 years, the Earth’s surface temperature has on average increased by 0.2°C every decade, mainly due to human induced emissions of greenhouse gases. But from one year to the next, there are also large variations which are on a similar scale.

If we are to reach the Paris Agreement ambition of limiting global warming to no more than 2°C – or less – the first step will be to slow down the warming process. But although the necessary emissions reductions are effective from day one, it will take some time before we can measure this effect with certainty.

In addition to being impacted by greenhouse gas emissions, the Earth’s climate is also characterized by a lot of natural variability. One of the main goals of this study was to find out how we can expect the global surface temperature to develop, taking both human-induced and natural factors into account, according to Samset.

Just like it took some time to establish that global warming is happening, we will need to have some patience before we can determine that the actions taken to limit global warming are having the desired effect.

Samset and his colleagues estimate that even for the most optimistic scenarios, there is a risk that it will not be possible to establish that the emissions cuts have had an impact on global warming before 2035. However, that does not mean that the emissions reductions are not having the desired effect, according to Samset.

The effects of climate cuts can be compared with those resulting from social distancing during an epidemic. They work from day one, but because of the incubation time, it will take some time before you can see the effect on the infection rates.

Similarly, all reductions in warming emissions will lead to less heat being absorbed, but it will take some time before we can measure this effect. Luckily, there are other methods we can use instead. We can estimate emissions reductions very quickly, and if there is a slower increase in the amount of greenhouse gases in the atmosphere, we will see it.

But for temperature, which is what we really care about – and which, among other things, has an impact on the increased frequency and severity of extreme weather – it will take decades before we will be able to measure the effect.

The study also analyzed the effect of cutting one single type of emissions, such as methane, soot, or carbon dioxide (CO2), independent of the development of other greenhouse gas emissions.

By combining results from a large US modeling project with their own analyses, the CICERO researchers involved in this study have developed a new method for assessing the impact of individual or combinations of targeted emissions cuts.

The human-induced emissions with the biggest impact on global warming are CO2 and methane. If these emissions are reduced very strongly, we will see the effect quickly. But if reductions follow more realistic pathways, it will unfortunately take longer.

The component with the most rapid temperature effect is soot. Soot particles only stay in the atmosphere for a few days, and their impact on the climate after an emission cut is therefore short-lived.

Unfortunately, the net climate impact of soot is not very strong, so there is less to gain from cutting soot emissions, Samset added. Reducing soot emissions across the globe is, however, crucial for improving air quality, and it is thus important to find out how cuts in soot emissions affect the temperature increase, according to Samset.

As part of the study, the researchers have also analyzed what would happen if air pollutant emissions such as sulfur dioxide (SO2) were reduced significantly, similar to what happened during the coronavirus pandemic. Unlike soot, methane, and CO2, cutting SO2 emissions would in fact speed up global warming.

According to a previous study by CICERO, the cooling effect of sulfate currently in the atmosphere can be as strong as 0.5°C. Like soot, sulfate particles only remain airborne for a few days, and cutting SO2 emissions would therefore have a very rapid temperature effect.

Some commentators have therefore asked whether we would now be able to measure increased global warming as a result of the COVID-19 lockdowns. According to the new study, the answer is no.

If we were to cut all SO2 emissions, it would only take a few years before we would see an increase in the global warming rate. That is very fast compared with the other types of emissions, but still slow enough for us not to expect any measurable effect even from the sharp reductions we’ve seen during the ongoing pandemic. The SO2 cuts in 2020 will simply be too small and short-term to be visible above the noise from natural variability.