The EU could slash truck carbon pollution by more than a fifth (22%) in a decade by requiring its main cities to have electric truck charging infrastructure, according to a new study released by European environmental NGO Transport & Environment (T&E).

The analysis by T&E’s Lucien Mathieu of truck flows data identifies 173 cities and urban areas where chargers are needed in 2030 to put Europe’s road freight on a path to zero emissions. Transport & Environment (T&E) said that next year the EU should set ambitious targets for e-truck chargers.

Half of EU’s total truck activity … is driven over distances of less than 300 km. These trips could be covered today by electric trucks, ​thanks to new models currently coming to the market with about 300 km range (enough to cover nine trips out of ten). But limited supply and​lack of charging strategy currently slows down the uptake. It is expected that the range of the electric trucks available will swiftly increase to 500 km, covering about two thirds of kilometers and 19 trips out of 20.

… The analysis finds that targeting the EU's largest urban areas is the optimal zero emission freight strategy for the next years. Based on a novel methodology, this report shows that electric truck adoption and deployment of associated charging infrastructure should be prioritised in 173 medium and large urban areas in the EU, called here ‘urban nodes’.

—“Unlocking Electric Trucking in the EU: recharging in cities”

The 40,000 chargers at distribution centres and public places would require a €28 billion investment over 10 years, or €2.8 billion a year on average, the analysis finds. Currently €100 billion is spent on road infrastructure every year in the EU. 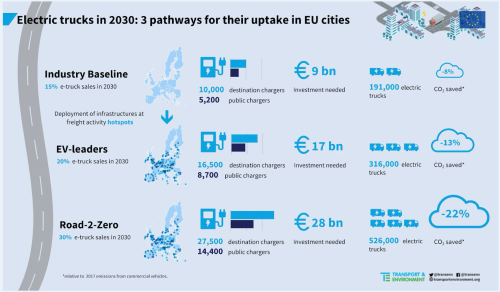 Electric trucks are clean, cheaper to run and available today. But the lack of a European charging strategy and the underwhelming supply from European truckmakers is holding back the market. The EU needs to set ambitious targets for the roll-out of infrastructure and let Europe’s truck fleet go emissions free.

Providing these chargers will serve half a million e-trucks and allow 43% of the EU’s truck trips to go emissions free by 2030, the analysis shows. Cities and towns would benefit from clean and quiet vehicles making home deliveries and supplying supermarkets.

T&E said next year’s review of the Alternative Fuels Infrastructure Directive (AFID) should only focus on electricity and green hydrogen infrastructure to be coherent with the EU Green Deal’s climate ambitions. Infrastructure to fuel gas trucks should be excluded under the law and thereby also disqualified from receiving EU funding, T&E said. In 2022, the EU should also push truckmakers to accelerate the supply of zero-emission vehicles with more ambitious CO2 reduction targets when it reviews the 2030 standard.