PowerCell Sweden AB will participate in an EU project that will develop and operate a refuse truck with fuel cells for Renova AB, western Sweden’s leading environmental enterprise within recycling and waste management. Renova’s end customer, the City of Gothenburg, wants to increase testing of fuel-cell-powered refuse trucks.

The truck and its operation will be partly funded by the EU project REVIVE which has an objective to accelerate the development of hydrogen-fueled refuse trucks in Europe.

REVIVE will place 15 fuel cell refuse vehicles to be tested in 8 different cities or regions in Europe: Breda, Helmond, Amsterdam, and Groningen (the Netherlands), Antwerp (Belgium), Bolzano and Merano (in South Tyrol, Italy) and Gothenburg (Sweden).

PowerCell has previously participated in a joint project with Renova, Scania, truck body manufacturer JOAB and the Royal Institute of Technology, to develop a fuel cell electric refuse truck which uses a fuel cell to power an on-board electric motor and refuse compactor. That project was partly funded by the Swedish Energy Agency. (Earlier post.) 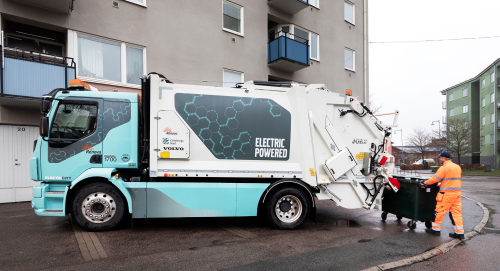 Both PowerCell and Renova have recently been approved as project partners in the EU project REVIVE (Refuse Vehicle Innovation and Validation in Europe), which will partly fund the fuel cell integration and operation of the new refuse truck. This project has received funding from the Fuel Cells and Hydrogen 2 Joint Undertaking under grant agreement Nº 779589. This Joint Undertaking receives support from the European Union’s Horizon 2020 research and innovation program, Hydrogen Europe and Hydrogen Europe Research.

Refuse trucks operate on fixed routes and return to their starting point at the end of each shift, which eliminates the requirement for an extensive network of hydrogen filling stations and makes the vehicles ideal for testing fuel cell technology.

I believe that this is another application where Battery Electric would work and be less expensive in terms of capital expense, maintenance, and energy cost. These vehicles start and stop every 50 meters or so and while working probably average less than 10 km/hr and then drive a relatively short distance to a discharge point. The typical total distance driven per day is probably less than 100 km and they are only used about 8 hours per day leaving all night to be recharged.

You are correct sd, this is just greenwashing

Refuse trucks are heavy with hydraulics and stop/go.
The energy use could be substantial.

The name is SJC, at least get that right.

SJC , sorry for the slip of the finger. I am used to typing SLC for Salt Lake City.

But, I will stand by the comments.