As suggested in 2018, (earlier post) the 2021 Jeep Gladiator is now available with the 3.0-liter EcoDiesel V-6 engine. The expected fuel economy ratings will deliver the highest driving range on one tank of fuel yet for Gladiator. 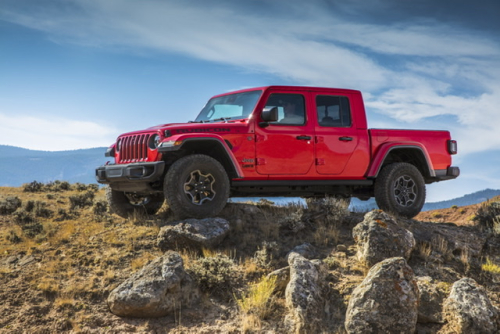 There are more than 40 individual shift maps to optimize shift points for fuel economy, performance and 4x4 capability.

The 2021 Jeep Gladiator EcoDiesel goes on sale in the third quarter of 2020 and customers can order now.

The 3.0-liter EcoDiesel V-6 uses dual overhead camshafts (DOHC) with four valves per cylinder and a 60-degree angle between the cylinder banks. The block is cast with compacted graphite iron, which provides strength to dampen vibrations, but weighs less than gray cast iron. A compacted graphite iron bedplate adds rigidity to the block.

The diesel engine’s turbo Charge Air Cooler (CAC) is located at the base of the grille, in front of the radiator, to maximize cooler temperatures. The CAC uses the same mounting position as in the four-cylinder gasoline turbo engine, helping to reduce complexity.

A new 5.1-gallon diesel exhaust fluid (DEF) tank is located immediately behind the fuel tank with refill location next to the diesel fuel filler. DEF refills align with oil changes lasting up to 10,000 miles. Levels are monitored via a new DEF gauge in the front cluster.

The 3.0-liter EcoDiesel V-6 engine is produced at the FCA Cento facility in Ferrara, Italy.

This is positively dripping with testosterone.
Gladiator, Rubicon, Rock-Trac.
+ the picture of the truck on the top of a rocky mountain- as opposed to the Wal mart car park which is a more likely setting.
One for the democrat voters, I imagine.

One very expensive status symbol for most buyers.