Rivian closes $2.5B investment round

Rivian has closed an investment round of $2.5 billion. The financing was led by funds and accounts advised by T. Rowe Price Associates, Inc. Rivian has developed and vertically integrated a connected electric platform that can be flexibly applied to a range of applications including the company’s adventure products as well as B2B products such as the Amazon last-mile delivery vans. 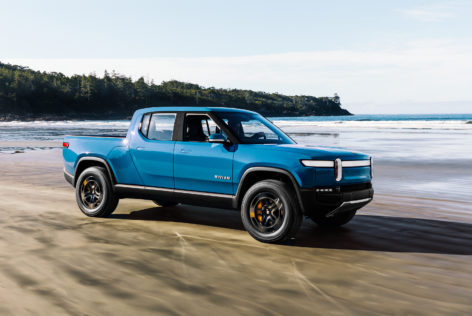 Rivian has developed and vertically integrated a connected electric platform that can be flexibly applied to a range of applications including the company's adventure products as well as B2B products such as the Amazon last mile delivery vans.

We are focused on the launch of our R1T, R1S and Amazon delivery vehicles. With all three launches occurring in 2021, our teams are working hard to ensure our vehicles, supply chain and production systems are ready for a robust production ramp up. We are grateful for the strong investor support that helps enable us to focus on execution of our products.

No new board seats have been added, and additional details about this investment are not being disclosed at this time. The investment announcement is Rivian's first in 2020. In 2019:

Rivian’s launch products, the R1T and R1S, deliver up to 400+ miles of range and provide a combination of performance, off-road capability and utility. These vehicles use the company’s flexible skateboard platform and will be produced at Rivian's manufacturing plant in Normal, Ill., with customer deliveries expected to begin in 2021.

So with Tesla cyber truck we are sure to have to electric pickup on the market next year. The big 3 should worry .

No, Ford and GM will have one in a while.

SJC , my impression is that the big 3 are following the trend very very softly which might end up as a pigeon hole at some point. None of them are pro-active in the electric revolution

I don’t believe many traditional truck owners will defect to the Cybertruck, but it will open a new segment, similar to the El Camino and Ranchero in the late 60s and 70s.

The Rivian will pick off guys who were spending $80k on a truck that gives them status and cuts a particular profile.

GM and Ford will go slow and be timid with innovation because they don’t want to upset the status quo, impair their cash cows.

Like most disruption, they’re stuck in a trap, and by the time they realize how badly they are being disrupted, it will be too late, they won’t have time to gat up with their competitors growth curve.

Just a few years ago, I talked to big 3 auto execs who were still dismissing - contemptuously - Tesla. Their strategy was to wait for Tesla to fail, they were certain of it. Incredible.

Tesla and Rivian have shown that the main barrier to entry - massive capitalization - can be overcome.

What is the big deal with Rivian ?
Have they some special tech or are people just hoping to get the next Tesla?

It might be worth reading "The Innovator's dilemma" by Clayton Christensen.
I think we are writing a new chapter as we speak.

Ford will attempt to take this market, lock, stock and barrel. If they succeed, their $500m investment will have paid off.