Freight carrier the Delanchy Group, which has been using a 100% electric Renault Trucks D prototype since 2017, has received the first D Z.E. series model. (Earlier post.) 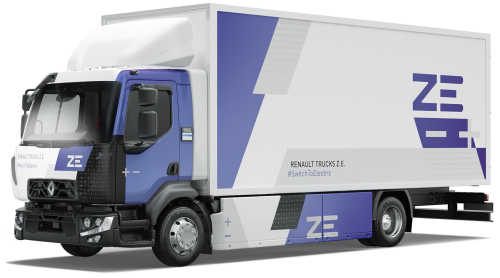 For the Delanchy Group, as for Renault Trucks, urban transport needs to move rapidly towards electric mobility in order to improve quality of life in city centers and take action against global CO2, emissions. The refrigerated transportation specialist decided to order the very first 16-ton D Z.E. from Renault Trucks to come off the production line at the Blainville-sur-Orne (Calvados) manufacturing plant.

A committed haulage contractor in terms of electric mobility, we were keen to be involved in developing a zero-emissions refrigerated delivery solution for city centers. We were able to test and validate this technology thanks to the 100% electric Renault Trucks D prototype, which we were pleased with both in terms of its use and maintenance.

Our staff and customers are equally satisfied, which is why the Delanchy Group has confirmed its commitment to electric mobility by ordering the very first Renault Trucks D Z.E. series. This second electric carrier will join our fleet and thereby help give our transport solutions a real ‘energy mix’.

The Delanchy Group is still deciding on the allocation of this new, 100% electric carrier, which will go to Paris or Lyon to make journeys of around 110 kilometers. Among the 1,000 vehicles within the Group, this first Renault Trucks D Z.E. joins a fleet of 340 carriers used for distribution operations.