Researchers use synchrotron in quest for better synthetic fuels catalyst

Using X-rays from a synchrotron particle accelerator, scientists of the Karlsruhe Institute of Technology (KIT) have now been able to observe for the first time a catalyst during the Fischer-Tropsch reaction that facilitates the production of synthetic fuels under industrial conditions.

The researchers intended to use the test results for the development of bespoke power-to-X catalysts. The team has published the results in the journal Reaction & Chemical Engineering. 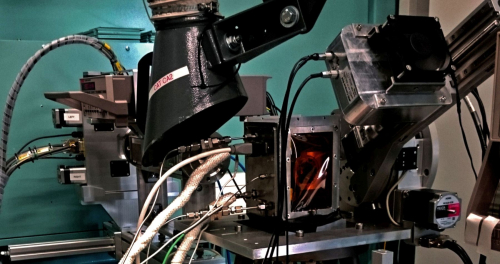 Fischer-Tropsch synthesis (FTS) yields long-chain hydrocarbons for the production of gasoline or diesel from carbon monoxide and hydrogen and is an established process in the chemical industry. However, even though more than one hundred years have passed since the discovery of this technology, the processes involved are still not fully understood scientifically.

This applies in particular to the structural changes in the catalysts required for the process under industrial conditions. During the reaction, undesirable by-products can be formed or disruptive structural changes in the catalyst can occur. So far, it has not been explained sufficiently how this happens exactly during the reaction and what the effects on the overall process are.

In a transdisciplinary project, in cooperation with power-to-X (P2X) experts from the Institute for Micro Process Engineering (IMVT) and the Institute of Catalysis Research and Technology (IKFT) of KIT, the team has now achieved a breakthrough in understanding the FTS at the atomic level.

For the analysis, we use methods of synchrotron research, i.e. X-ray absorption spectroscopy and X-ray diffraction. This was the first time that we were able to watch, so to speak, an FTS catalyst at work at the atomic level under real process conditions.

While catalytic reactions had already been studied beforehand with a synchrotron, a special particle accelerator for generating particularly intense X-ray radiation, reactions that take place over a long period of time and at high temperatures and pressures, as in real-time operation at a P2X facility, have so far presented an obstacle. For the experiment at KIT, a novel high-pressure infrastructure has now been added to the CAT-ACT measuring line (CATalysis and ACTinide measuring line) designated for catalyst studies at the KIT synchrotron.

With this infrastructure—which was built as part of the German Federal government’s Kopernikus projects for the energy turnaround—it was possible to determine the function of a commercial cobalt-nickel catalyst operando at 250 °C and 30 bar for more than 300 hours during the FTS. This was also the first time that a sufficient quantity of hydrocarbons could be produced in such an experiment that could be analyzed afterwards.

The experiment allowed the scientists to identify hydrocarbon deposits that hinder the diffusion of the reactive gases towards the active catalyst particles.

In the next step, these insights can be used to protect the catalyst specifically against these deactivation mechanisms. This is done, for example, by modifying the catalyst with promoters, i.e. substances that improve the properties of the catalyst.

In the future, the novel atomic understanding of catalytic reactions will contribute to computer simulations for a fast, resource-saving and cost-effective development of bespoke catalysts for P2X processes.

Use MTG not FT.