Scientists from ExxonMobil, the Georgia Institute of Technology and Imperial College of London have published in the journal Science joint research on potential breakthroughs in a new membrane technology that could reduce emissions and energy intensity associated with refining crude oil. Laboratory tests indicate the patent-pending membrane could be used to replace some heat-intensive distillation at refineries in the years ahead.

The fractionation of crude-oil mixtures through distillation is a large-scale, energy-intensive process. Membrane materials can avoid phase changes in such mixtures and thereby reduce the energy intensity of these thermal separations. With this application in mind, we created spirocyclic polymers with N-aryl bonds that demonstrated noninterconnected microporosity in the absence of ladder linkages. The resulting glassy polymer membranes demonstrated nonthermal membrane fractionation of light crude oil through a combination of class- and size-based “sorting” of molecules. We observed an enrichment of molecules lighter than 170 daltons corresponding to a carbon number of 12 or a boiling point less than 200 °C in the permeate. Such scalable, selective membranes offer potential for the hybridization of energy-efficient technology with conventional processes such as distillation.

By substituting the low-energy membranes for certain steps in the refining process, the new technology might one day contribute to a hybrid refining system that could help reduce carbon emissions and energy consumption significantly compared to traditional refining processes. 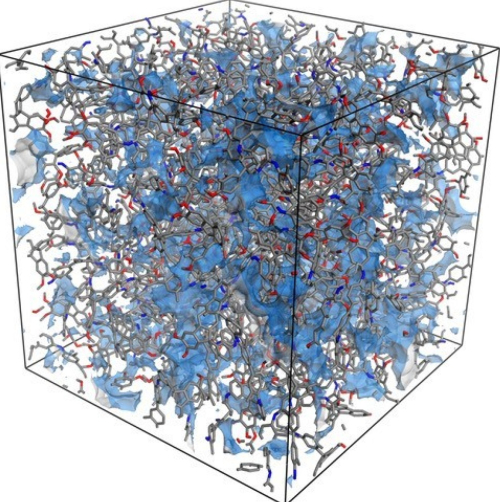 A molecular model of the polymer membrane, with the pores shown in blue. Imperial College London.

Inspired by reverse osmosis technology that has reduced energy intensity tenfold for water purification, we decided to look into ways to use new materials for liquids separation, which if brought to industrial scale, could significantly reduce associated greenhouse gas emissions. This is one of many new materials ExxonMobil is researching to reduce energy intensity and CO2 in our operations.

Membrane technology is already widely used in applications such as seawater desalination, but the complexity of petroleum refining has until now limited the use of membranes. To overcome this challenge, the research team applied a new polymer to a surface to create membranes able to separate the complex hydrocarbon mixtures that make up crude oil through the application of pressure rather than heat.

The team balanced a variety of factors to create the right combination of solubility, which enables membranes to be formed by simple and scalable processing, and structural rigidity, which allows some small molecules to pass through more easily than others.

The researchers found that the materials needed a small amount of structural flexibility to improve size discrimination, as well as the ability to be slightly ‘sticky’ toward certain types of molecules that are found abundantly in crude oil.

The polymers were designed and tested at Georgia Tech, then converted to 200-nanometer-thick films and incorporated into membrane modules at Imperial. In the gasoline and jet fuel range, the membranes developed by the team are twice as effective as the most selective commercial membranes in use today.

This membrane technology was developed by a diverse team of scientists and engineers using a ‘multi-scale’ approach that ranges from the molecular-scale to realistic membrane devices.

It’s rare that chemists have the chance to participate in both inventing new molecules and applying them to solve real-world problems. In this case, it really took a whole village of differing expertise to bring to fruition a new approach for separating the components of crude oil using much less energy than before.

—M.G. Finn, Chair of the School of Chemistry & Biochemistry at Georgia Tech and a joint lead of the study

Additional research and development will be needed to progress this technology to industrial scale.

We have the foundational experience of bringing organic solvent nanofiltration, a membrane technology becoming widely used in pharmaceuticals and chemicals industries, to market. We worked extensively with ExxonMobil and Georgia Tech to demonstrate the potential scalability of this technology.