The CCS Full-Scale project is a central part of Norway’s efforts to reduce its carbon footprint and meet the European goal of climate-neutrality by 2050. It is the largest single state aid award ever approved by the EFTA (European Free Trade Association) Surveillance Authority (ESA).

Carbon Capture and Storage (CCS) has been recognized by the European Union as key to reducing the harmful environmental effects of carbon-intensive sectors (such as construction), where emissions are difficult to avoid.

By supporting the project, the Norwegian government aims to facilitate further scaling up of CCS globally, by sharing knowledge and experience. The project will establish infrastructure for capture, transport and storage of CO2 emissions that can pave the way for future investments, innovation and technology in CCS as a climate-change mitigation tool.

The approved project would allow for the establishment of carbon capture facilities at Norcem, a cement factory in Brevik, and Fortum Oslo Varme, a Waste-to-Energy plant. The captured CO2 is then to be transported and stored deep below the seabed in the North Sea. This part of the process is to be carried out by a joint venture between Shell, Total and Equinor, known as Northern Lights. 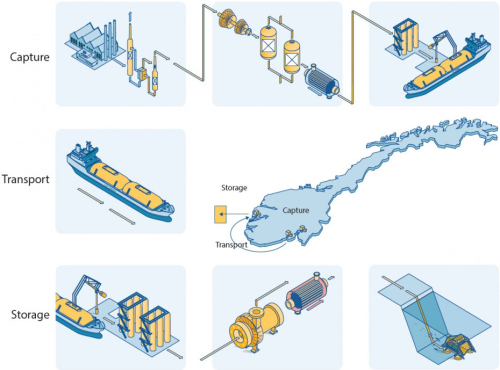 The Full-Scale CCS Project promises to become the first of its kind to go live in Europe. It has a budget of up to €2.57 billion, which will cover construction and 10 years of operation. The Norwegian government would cover around 80% of the project’s estimated budget.