Volkswagen Group of America, Inc. (VWGoA) and Tradepoint Atlantic celebrated the first day of operations at the Tradepoint Atlantic terminal at the Port of Baltimore, VWGoA’s newest port in the US. The port, which will serve roughly 302 dealers in the mid-Atlantic region, marks an approximately $150-million investment in the Baltimore-area and the creation of about 100 new jobs. 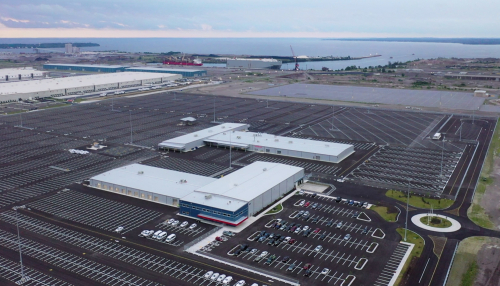 VWGoA port operations were made official with the arrival of the first vehicle transport vessel, Bishu Highway, delivering 797 vehicles from Europe. Volkswagen, Audi, Lamborghini and Bentley vehicles will be imported and processed at the port.

The combination of a direct connection to the national rail network and easy access to major highways will lead to enhanced customer service and faster vehicle delivery times for dealerships throughout the mid-Atlantic region. Tradepoint Atlantic Terminal is VWGoA’s eighth port in the US, which includes locations in Benicia, CA, Davisville, RI, Houston, TX, Jacksonville, FL, Midlothian, TX, San Diego, CA and the Volkswagen Assembly Plant in Chattanooga, TN.

This announcement represents VWGoA’s commitment to sustainability through the adaptive reuse of a former industrial brownfield site, which was once home to one of the largest integrated steel mills in the United States. The site will also help decrease the distance needed to deliver vehicles to dealers in the mid-Atlantic region, which in turn helps reduce carbon emissions associated with these vehicle deliveries. This is a key building block in Volkswagen Group’s global strategy to become carbon neutral across its business by 2050.

Under the terms of the 20-year lease agreement with Tradepoint Atlantic, VWGoA’s vehicle import and processing facility will encompass more than 4 million square feet (115 acres) at Tradepoint Atlantic’s Terminal, a 3,300-acre multimodal global logistics center. The port will be responsible for the import of approximately 120,000 vehicles per year from European and Mexican production facilities, with increased volumes expected over time.

Tradepoint Atlantic is the largest private terminal within the Port of Baltimore. The location of VWGoA’s new processing center is formerly the site of Bethlehem Steel, which closed in 2012. The Port of Baltimore transported approximately 857,890 vehicles in 2019.