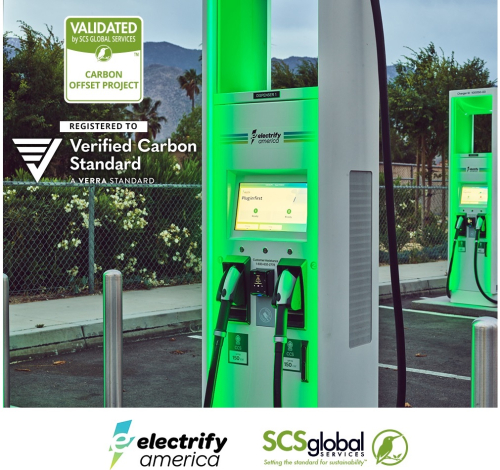 Under the project plan validation, SCS confirmed that Electrify America’s EV charging stations adhere to a rigorous new methodology describing how charging stations should be able to reduce CO2 emissions compared to the baseline case—fueling and driving gasoline-powered vehicles.

Once completed, the project will undergo verification of these CO2 emissions reductions in order to be eligible to receive Verified Carbon Units or VCUs (the carbon credits issued under the Verified Carbon Standard). The credits can be sold on the voluntary carbon market to companies or entities that want to offset their emissions towards carbon neutrality by purchasing credits directly associated within the transportation sector.

Electrify America is on track to meet its targets of achieving validation and verification for its first 400-plus charging stations early next year which will include VCUs from 2019 and 2020 in 48 states, excluding California and Oregon which have compliance marketplaces.

The methodology used to calculate the carbon emissions offset by this project is first-of-its-kind and is approved for use under the VCS Program, which is operated by Verra, a non-profit organization that develops and manages standards for climate action and sustainable development; the project has also been independently assessed by SCS.

The methodology, entitled VM0038, Methodology for Electric Vehicle Charging Systems v1.0, was pioneered by the Electric Vehicle Charging Carbon Coalition (EVCCC), of which Electrify America was a founding member. The EVCCC was led by Sue Hall, the CEO of the Climate Neutral Business Network, and was recognized in 2019 with a Climate Leadership Award for its innovative partnership approach in developing VM0038.

Validation of the project included SCS’s assessment of the project’s conformance to the VM0038 methodology and to the Verified Carbon Standard (VCS) rules, as well as an evaluation of the likelihood that the methods and procedures will generate the predicted GHG emissions reductions once implemented.