The proposed EPA standards would address subsonic jet aircraft with a maximum takeoff mass (MTOM) greater than 5,700 kilograms and subsonic propeller-driven airplanes (e.g., turboprops) with a MTOM greater than 8,618 kilograms. Examples include larger business jets such as the Cessna Citation CJ3+, the larger commercial jet aircraft (such as the Boeing 777 and the Boeing 787) and larger civil turboprop airplanes such as the ATR 72 and the Viking Q400. These are same types of airplanes covered by the international aircraft CO2 standard.

Aircraft covered by the proposed rule account for 10% of all US transportation greenhouse gas (GHG) emissions and 3% of total US GHG emissions.

The EPA is proposing to adopt the ICAO CO2 metric, which measures fuel efficiency, for demonstrating compliance with the GHG emission standards. This metric is a mathematical function that incorporates the specific air range (SAR) of an airplane/engine combination (a traditional measure of airplane cruise performance in units of kilometer/kilogram of fuel) and the reference geometric factor (RGF), a measure of fuselage size. 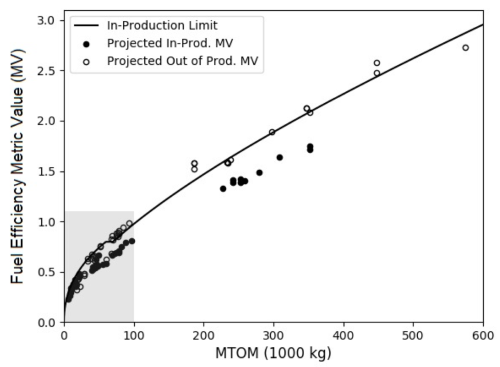 To measure airplane fuel efficiency, the EPA is proposing to adopt the ICAO test procedures whereby the airplane/engine SAR value is measured at three specific operating test points, and a composite of those results is used in the metric to determine compliance with the proposed GHG standards.

After EPA promulgates the final rule with the standards, FAA will complete a subsequent rulemaking to enforce these standards. At that point, FAA could begin to certify airplanes of US manufacturers. This process will take time, EPA said, and it is critical that EPA complete this part of the process so that the U.S. standards are in place well in advance of 2028, when the ICAO standards go into effect for in-production airplanes.

Under the Clean Air Act, in 2016 EPA found that emissions of GHGs from engines used in certain aircraft causes, or contributes to, air pollution which may reasonably be anticipated to endanger public health or welfare. These findings triggered a requirement for EPA to promulgate standards addressing GHG emissions from the engines of affected aircraft. The new action begins the process of following through on that requirement.

The ICAO standards were developed with input from EPA, the Federal Aviation Administration (FAA), and US and international aviation industries. Typically, three out of four aircraft manufactured in the US are sold overseas. EPA said that these standards will help ensure consistent standards across the world, and—most importantly—allow US-manufactured planes, such as commercial and large passenger jets, to continue to compete in the global marketplace.

100 million gallons of high sulfur jet fuel burned
at 30,000 feet every day is not helping.

In the short term, they need a way to stop flying mostly empty aircraft around.
They need a sort of real time , reconfigurable code share system so you can get aircraft close to 80% full, rather than 3/4 empty as they are now.
I can see large IT problems here, but the biggest problem would be missing connections.
However, flying mostly empty aircraft is an abomination.
After that, you have the problem of how closely can you pack people on planes - a bit of a worry with COVID. And also how to manage airports.
We may end up flying a lot less, especially long haul. I'd very much like to go "somewhere in Europe (inc Turkey)" for a holiday, I do not need to go to the USA or Oz.
(Certainly nor every year).

A valiant attempt by a Trump controlled EPA to control emissions from blowtorches without doing anything significant.
The only approach that will work to reduce the pollution and still allow jet engines as power devices is to redesign the fuel and the engine burner system as a unit. Perhaps switching to burning hydrogen is the answer. And, in this case, I would conceded creating the hydrogen from natural gas, fossil fuel. It's best to pollute at ground level than at 30,000 feet and continue to destroy the upper atmosphere.
It's downright comical to see EPA trying to define smog and GHG standards to fit the current jet engines without downright grounding them. Jet engine are and always have been gross polluters...covering up this truth has been working for a long time by ignoring the problem.

Sorry to contradict you but it's best not to pollute at all. Of course that is impossible - however, it is possible to minimize pollution to such a level where nature can still cope with it and that is certainly not the solution which you have suggested.

@Lad, how do you store the H2 in an aircraft ?
i do not think it is realistic. Better to use the H2 on the ground for something and do an offset (yuck) to keep people flying.
@Yoat, but fly less. You don't need to fly 5000 miles for every summer holiday and we can reduce the amount of business flying by zooming, not booming. (but not to zero, sometimes you have to meet people).

They can reform jet fuel to hydrogen for fuel cells on board.
You have hybrid jet engines with large motors on the front turbo fan.

The idea is to use H2 in jet engines on the takeoff and climb out; then use fuel cells/electric motors for cruise and let downs. Nothing like that exists today or will ever happen unless those agencies and the elected politicians address aircraft pollution.

My way you use bio synthetic jet fuel with NO sulfur.
The turbines/motors provide thrust for climb,
throttle back small turbines for cruise while recharging batteries.