Jeep is taking orders in Europe for the Renegade 4xe and Compass 4xe plug-in hybrids (earlier post)—the first electrified Jeep models in the EMEA Region. The Jeep 4xe models will debut in Jeep showrooms across Europe in September with three trim levels: ‘Limited’, ‘S’ and ‘Trailhawk’, two power levels—190 or 240 hp—a suite of technology and safety features, exclusive new e-driving functions, and public and home charging solutions with the easyWallbox. 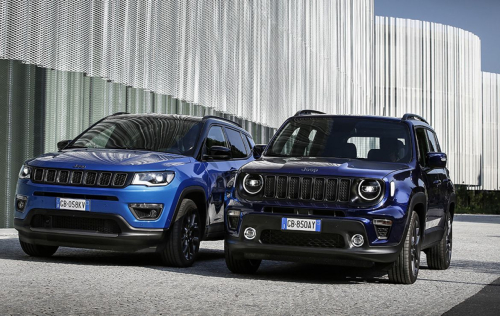 The world première of the pioneering electrified Jeep SUVs took place during the 2019 Geneva International Motor Show. (Earlier post.) Jeep Renegade 4xe and Jeep Compass 4xe are built at the FCA Melfi Plant in Basilicata (Italy), where the Jeep Renegade has been in production since 2014.

The 1.3-liter turbo engine that powers the Renegade and Compass 4xe belongs to the new FCA Global Small Engine family. It is based on a modular structure and is available for the 4xe versions in the four-cylinder configuration with two output levels: 130 (Limited version) or 180 hp (Trailhawk and S).

The basic structure of the 1.3-liter turbo gasoline engine of the Renegade and Compass 4xe guarantees efficiency, modularity, and a considerable degree of standardization in terms of components and manufacturing process, flexibility, and potential for future development. It is entirely made of aluminum for lightness (it weighs 106 kilograms). The crankcase, developed in partnership with Teksid, is made of high-pressure die-cast aluminum alloy.

One electric motor is located on the front axle and is coupled to the internal combustion engine so that, in addition to working in synergy with the engine, it can act as a high-voltage generator, as necessary.

By integrating the electric machine on the auxiliary belt it was possible to design a control logic that optimizes the dynamics and efficiency of the internal combustion engine and the downstream automatic transmission. The result is a front axle superior to any equivalent conventional powertrain capable of offering a lively, smooth, and efficient behavior.

The second motor is located on the rear axle and features reduction gear and integrated differential ("e-axle"). Powered by the battery, it delivers 60 hp of power and 250 N·m of torque, generating traction and recovering energy while braking.

An integrated module for controlling the charging of the high-voltage and conventional 12V batteries of the car which is compact in size and mounted in the trunk.

The small size of the charging module placed in the trunk and the arrangement of the electric motor under the floor means that trunk capacity is practically the same as the conventional engine version (330 liters for Renegade and 420 liters for Compass - in the configuration with seats in upright position). At the same time, the dual function of the trunk with a raised loading surface at the top and maximized loading capacity at the bottom was maintained. The layout means that a spare wheel can be housed under the trunk on the 4xe versions of both models.

The battery can be recharged while driving or through an external power outlet either at home with the domestic plug, using the efficient and practical easyWallbox or the more advanced Connected Wallbox, or from a public charge point.

The plug-in hybrid electric technology in full-electric mode allows customers to travel with zero emissions and an average range of 50 km (31 miles).

The system has three operating modes: Hybrid, Electric, and E-save. The desired mode can be activated using the selector switch located in front of the gear lever. In all driving modes, the regenerative braking system recovers energy during passive driving phases (such as deceleration or light braking). Additionally, Renegade and Compass 4xe travel in hybrid mode when the battery reaches the minimum charge level regardless of the selected mode.

e-Coasting intervenes in place of the exhaust brake when the throttle is released, allowing energy recovery when slowing down even with the brake pedal released. It can be differentiated by a button on the central tunnel, located under the gear lever.

Regenerative braking is always active regardless of the driving mode (internal combustion engine or electric motor) to maximize energy recovery when the throttle and brake pedals are released. The e-Coasting mode can be activated on Renegade and Compass 4xe when the transmission is in the “D” (Drive) position.

By pressing the e-Coasting button, the breaking intensity can be activated according to two different levels, more or less intense. A warning light on the instrument panel display indicates activation through two different colors:

After the more intense function has been activated by the driver, the regenerative braking calibration is bolder when coasting, that is when the driver is not pressing the accelerator pedal. This feature reduces the speed faster than standard regenerative braking and generates more electricity to be conveyed to the battery pack.

A dedicated message will appear on the instrument panel during the transition from the “Intense” to “Normal” function and vice versa.

The new plug-in hybrid technology further enhances the off-road capability of both models, with the combination of the two propulsions resulting in more torque. For example, Trailhawk 4xe—the specialist off-road trim with overall power of 240 hp—boasts an increase in torque output up to 50% versus the 170 hp diesel Trailhawk model.

Furthermore, with the new 4xe technology, traction to the rear axle is not provided by a prop shaft but through a dedicated electric motor. This allows the two axles to be separated and to control the torque independently in a more effective way than a mechanical system, with traction being delivered to the rear wheels immediately when needed.

The Jeep Selec-Terrain traction control system manages the AWD system on Renegade and Compass 4xe by combining the five dynamic modes—Auto, Sport, Mud/Sand, Snow and Rock—to two different 4x4 traction modes, depending on the situation the drivers need to tackle: