The 2010 Census counted 308,745,538 people living in the United States; the 2020 Census is still counting and we will not know the final number until the work is done and presented to the president and Congress. However, the US Census Bureau provides population estimates between the decennial censuses and as projected, the nation reached a milestone at 8:02 a.m. EDT 23 July: the US population hit 330 million. 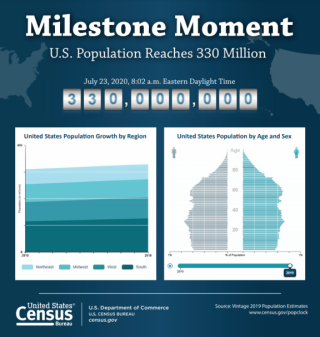 The population clock shows a net gain of one person every 16 seconds through the Population Estimates Program (PEP) which calculates the three components of change: births, deaths, and migration.

The last milestone (based on an old, and now superseded, series of estimates) was 325 million on 7 May 2017.

Results of the 2020 Census will have a major impact on all population estimates until the next Census in 2030.

Do you want Robux Codes for Roblox? We will provide you all the valid Robux Codes