Edmonton Transit Service (ETS) unveiled its first 21 Proterra electric buses and brand-new, purpose-built electric bus garages. ETS has 19 more Proterra buses on the way this year to make up a 40-bus fleet, one of the largest purchases of electric buses in Canadian history.

With this deployment, ETS also becomes the first to implement in-depot overhead charging on the continent. ETS will begin putting the electric buses into service in early August.

For many years I’ve advocated for the adoption of electric buses in our city, and I’m happy to see that Edmonton is leading the way. Our purchase is historic in that it represents the largest purchase of electric buses in Canadian history. Electric buses are a major component of the future of public transit in our city and across Canada, because they save the City money and benefit not only transit users who will get to experience the perks of a quieter commute with decreased emissions, but also Edmontonians who aren’t regular commuters on our transit system, as they’ll also benefit from the city meeting its energy and climate goals.

Edmonton selected the 40-foot Proterra Catalyst E2 max vehicle with 660 kWh of onboard energy and the DuoPower drivetrain. The E2 max bus has six Proterra battery packs on board—the most energy storage on any 40-foot electric bus—enabling these vehicles to get approximately 350 km (217 miles) of range on ETS routes. This vehicle model broke the world record for the longest distance traveled by any electric vehicle on a single charge, and ETS is the first customer in North America to put it into service.

By combining the DuoPower drivetrain with Proterra’s battery technology and lightweight composite bus body, the Catalyst vehicle provides superior performance and is designed to tackle Edmonton’s routes and winter climate.

To charge its new buses, Edmonton also unveiled the new Kathleen Andrews Garage, named after Edmonton’s first woman transit operator, who worked for the City for 23 years. ETS collaborated with the Proterra Energy team to install 26 ABB 150 kW depot chargers connected to inverted pantographs and seven 60 kW Proterra plug-in chargers in the maintenance area, all of which are interoperable and standardized. 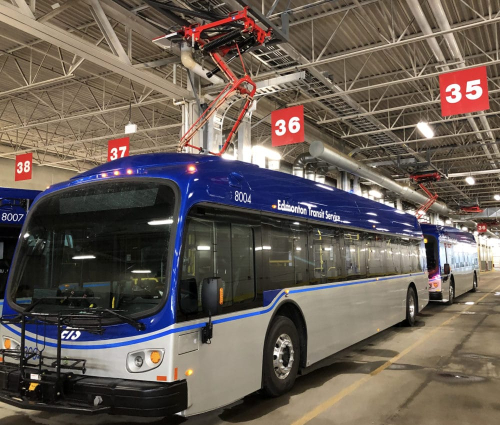 ETS bus operators are able to drive the buses into assigned parking spots and connect to the respective overhead chargers with the flip of a switch, and begin charging immediately or wait until a designated time when fleet management software will initiate charging. ETS, Proterra, and ABB created a first-of-its-kind installation in North America using RFID technology, Wi-Fi, and 2-step authentication that ensures each bus connects to its respective overhead charger.

ETS uses the Proterra APEX Connected Vehicle Intelligence System to monitor and manage its fleet of electric buses and charging systems. By using the APEX system, ETS will be able to monitor the status of its vehicles and gather information such as state of charge, charger status, bus efficiency, distance traveled, and more.

Providing more than 87 million rides a year in Edmonton, ETS currently operates approximately 1,000 diesel buses in a 700-square-kilometer service area. The City of Edmonton has a goal to reduce greenhouse gas emissions by 50% by 2030, and ETS plays an important role in achieving this goal.