The BMW Group will pilot the second generation of hydrogen fuel cell drives in a small series in the BMW i Hydrogen NEXT based on the current BMW X5 from 2022. The fuel cell stack and the overall system are original developments of the BMW Group; individual cells of the fuel cell will come from Toyota.

In the future, the hydrogen fuel cell drive can be an attractive alternative to battery-electric vehicles, in particular for customers who do not have their own access to electric charging infrastructure and who often drive long distances, BMW said. With a sufficient refueling infrastructure, hydrogen vehicles offer great flexibility, as the full range is available again after a short refueling process of around four minutes regardless of temperature conditions. 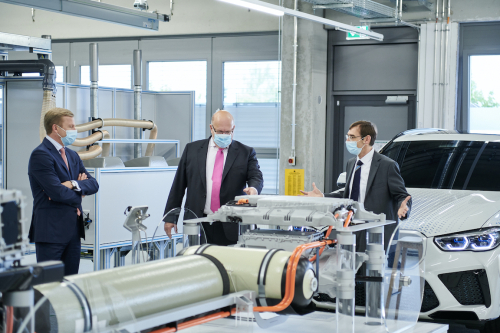 The electrical converter, which is located below the fuel cell, adjusts its voltage level to that of the electrical drive and the power buffer battery. This is fed by the braking energy and the energy of the fuel cell.

Two 700 bar tanks are housed in the vehicle itself, which together hold six kilograms of hydrogen.

The fifth-generation electric drive, which is used for the first time in the BMW iX3, is also fully integrated in the BMW i Hydrogen NEXT. The power buffer battery, which is positioned above the electric machine, can provide additional dynamics when overtaking or accelerating, for example.

The aim of this collaboration between BMW AG, Munich University of Applied Sciences, Leichtbauzentrum Sachsen GmbH, Dresden University of Technology and WELA Handelsgesellschaft mbH is to develop new types of hydrogen storage tanks. These should be designed so that they can be easily integrated into universal vehicle architectures.

The aim of the project is the development of flat tank tanks. The 3.5-year project, which is also funded by the Federal Ministry for Economic Affairs and Energy, will also result in a reduction in the manufacturing costs of hydrogen tanks for fuel cell vehicles. This will improve their competitiveness compared to battery electric vehicles.

I am not yet a hydrogen believer, but this amplifies the idea that a low power fuel cell can operate at a continuous low power to maintain a battery charge for the variable power needs of the average auto usage. The normal driving routines need extra power for acceleration and hills on occasion and very little for coasting and down hill/braking/regen needs. Interesting dynamics, but hydrogen distribution, refill, and storage still have practical issues to overcome.

FC PHEVs have been an idea for a long time.
Batteries allow acceleration while the fuel cell is a range extender.

Good idea to join with Toyota for FC experience...