In a review paper published in the journal ChemSusChem, researchers from Australia’s CSIRO conclude that the combination of synthetic biology and materials chemistry will provide many viable options to allow the use of nitrogenase for energy applications, such as the production of green ammonia for use as a preferred liquid carrier for hydrogen.

To export hydrogen from regions with high renewable energy intensity to those lean in renewable energy requires hydrogen to be in a form that is transportable. … in recent years significant advances have been made in both NH3 decomposition catalysts and membranes for hydrogen separation. These advances have provided technologies that are both scalable and economically viable, making ammonia the preferred carrier for the long-distance transport of hydrogen.

The conventional Haber-Bosch process for the production of ammonia from H2 and N2 is extremely energy-intensive, consuming up to 2% of the world’s annual energy output. In addition, the H-B process generates some 1.9 tonnes of CO2 per tonne of NH3 produced, depending on the source of the hydrogen.

While one alternative is using green hydrogen produced by renewable power as input to the H-B process, this pathway has several disadvantages, according to the authors. These include the use of two separate reactors and the need to compress the feedstock gases for the H-B reactor.

In addition to ongoing work on improving the H-B process, another alternative is the electrochemical synthesis of ammonia, where water electrolysis and the ammonia synthesis occur simultaneously in the same reactor via an electrochemical reaction route.

In contrast to the extreme temperature and pressures required by the H-B process, the specialist class of diazotrophic bacteria can reduce dinitrogen at ambient temperatures and pressure. These bacteria use an enzyme known as nitrogenase which converts dinitrogen (N2) and protons (H+) into NH3 and H2. Over the last five years, exciting progress has been made in developing processes whereby nitrogenase can be used to produce ammonia ex vivo which can be powered by renewable energy. This work has reignited interest in using nitrogenase enzymes for the production of ammonia and hydrogen, both of which have energy applications. Here, we outline key biochemical features of nitrogenase and how the recent advances can pave the way for solar powered enzymatic production of NH3 and H2. 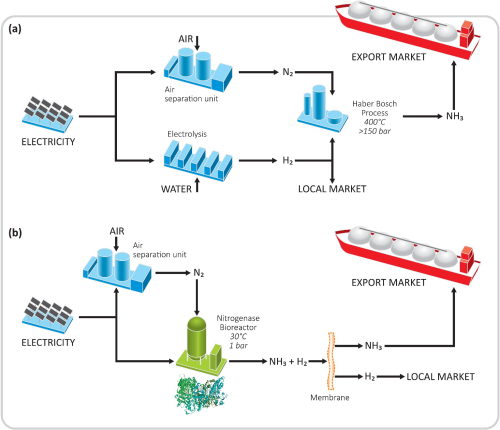 Outline of the proposed route for exporting renewable hydrogen as ammonia and how nitrogenase can shorten this multistep process. (a) The current model for the production of NH3 using H2 produced through water electrolysis in ammonia production, via the Haber-Bosch process. (b) Outline of the process using nitrogenase enzymes. The purified N2 feedstock is converted to ammonia and hydrogen via a solar-powered nitrogenase bioreactor. The NH3 and H2 are separated using a vanadium-based membrane for either export or local use, respectively. Rapson et al.

The authors noted that genome sequencing and DNA synthesis has grown rapidly over the last 20 years. These advances can be applied to building synthetic nitrogenase componentry.

Further, they note, advances in techniques such as directed evolution could allow the development of nitrogenase enzymes optimized for industrial applications. In addition, materials science can provide avenues to improve the fabrication of the bioelectrode with the potential to improve the stability of the enzyme.

The multidisciplinary nature of this work is immediately apparent. Success will require close collaboration between not only biologists, chemists and materials scientists but also crucially those working within the energy research fields. While there is an increase in such collaborative work, we need to continue to encourage this, particularly to develop a shared understanding of each other’s needs and capabilities. New characterization techniques to compare catalysts and the development of a shared language will help facilitate collaboration and ensure that the opportunity is fully realized.

The safety of gas ships is always an issue. But the horrific toxicity of ammonia suggests to me that it can never be allowed to become the default green method of powering commercial shipping. "Impossible" collisions still happen, as do sinkings near population centres. How can vessels like these ever be truly safe?

They can run SOFCs on LNG.

Ammonia is highly soluble in water.  Discharges below the waterline will be soaked up quickly, and it's lighter than air so substantial aerial discharges will rise.

The oceans are still teeming with life; but for how long? I'm extremely doubtful that the oceans will be sustainable to life for long as they are being used for disposal of garbage of any kind.