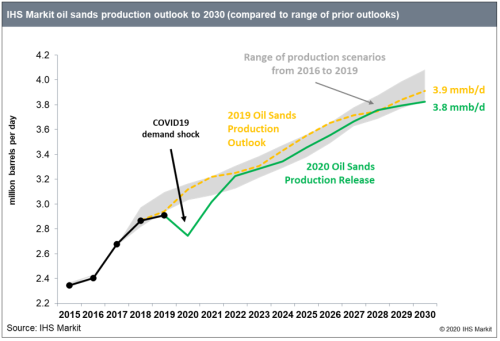 Prior to COVID-19, the coming decade was already expected to be one of sustained-but-slower growth for the oil sands, with transportation constraints such as a lack of adequate pipeline capacity and the resulting sense of price insecurity in western Canada weighing on new large-scale incremental investments.

The impact of COVID-19 has changed the reason for a period of lower investment in the oil sands not necessarily the direction of long-term expectations. Recent reductions, albeit dramatic, are likely to be only temporary and curtailed output is expected to return.

Oil sands production is anticipated to rise over the back half of 2020 and into 2021 as curtailed production comes back online and existing installed capacity that has never been fully utilized ramps up. Should the Government of Alberta ease its regulated curtailment, by 2022 oil sands output could rebound from its COVID-induced declines to more than 300,000 b/d higher than 2019 levels.

Production would then proceed along a trajectory close to prior expectations, with most production growth to 2030 coming from COVID-19 recovery and ramp-up of already existing production capacity. The IHS Markit forecast notes that remaining uncertainties in the global recovery from COVID-19 and the status of western Canadian pipeline capacity could shift the trajectory of oil sands production in the future. But previous projections for long-term production growth remain largely intact under current conditions.