Although intermetallic alloys potentially have high strength in a high-temperature environment, they generally suffer poor ductility at ambient and low temperatures, hence limiting their applications in aerospace and other engineering fields. Now, researchers led by scientists of City University of Hong Kong (CityU) have discovered that adding a small amount of boron in a nickel-cobalt-iron-aluminum-titanium alloy creates an ultrahigh-strength material.

Critically, the alloy has a nanoscale-disordered interface in between crystal grains that substantially improves the ductility while preventing high-temperature grain coarsening. The nanolayers can not only resolve the irreconcilable conflict between strength and ductility effectively, but also maintain the alloy’s strength with excellent thermal stability at high temperatures. Designing similar nanolayers may open a pathway for the design of new structural materials with optimal alloy properties.

This research was led by Professor LIU Chain-tsuan, CityU’s University Distinguished Professor and Senior Fellow of the Hong Kong Institute for Advanced Study (HKIAS). The findings are published in Science.

The discovery of this disordered nanolayer in the alloy will be impactful to the development of high-strength materials in the future. In particular, this approach can be applied to structural materials for applications at high-temperature settings like aerospace, automotive, nuclear power, and chemical engineering.

Professor Liu was one of those who studied this approach 30 years ago. At that time, he found that the addition of boron to binary intermetallic alloys (constituting two elements, such as Ni3Al) enhances the grain boundary cohesion, hence improving their overall ductility.

What we originally tried to do is to enhance the grain boundary cohesion through optimizing the amount of boron. We expected that, as we increased the amount of boron, the alloy would retain ultrahigh strength due to its multi-element constituents.

According to conventional wisdom, adding trace amounts (0.1 to 0.5 atomic percent (at. %)) of boron substantially improves tensile ductility by increasing grain-boundary cohesion. When excessive amounts of boron were added, this traditional approach would not work.

But when we added excessive amounts of boron to the present multicomponent intermetallic alloys, we obtained completely different results. At one point I wondered whether something went wrong during the experiments.

When increasing boron to as high as 1.5 to 2.5 at. %, these boron-doped alloys became very strong but very ductile. Experiment results revealed that the intermetallic alloys with 2.5 at. % of boron have an ultrahigh yield strength of 1.6 gigapascals with tensile ductility of 25% at ambient temperatures.

The team discovered that when the concentration of boron ranged from 1.5 to 2.5 at. %, a distinctive nanolayer was formed between adjacent ordered grains. Each of the grains was capsulated within this ultrathin nanolayer of about 5 nm thick. The nanolayer itself has a disordered atomic structure—a special phenomenon that had never been discovered and reported before, said Professor Liu.

Tensile tests showed that the nanolayer serves as a buffer zone between adjacent grains, which enables plastic-deformation at grain boundaries, resulting in the large tensile ductility at an ultrahigh yield strength level. 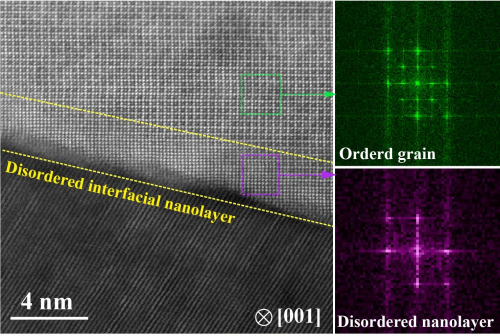 HAADF-STEM image reveals the ultrathin disordered layer at the grain boundaries with a thickness of about 5 nm. Yang et al.

The team found that the further increase in boron has substantially enhanced the “multi-element co-segregation”—the partitioning of multiple elements along the grain boundaries. With the advanced three-dimension atom probe tomography (3D APT) at CityU, the only one of its kind in Hong Kong and southern China, they observed a high concentration of boron, iron, and cobalt atoms within the nanolayers.

In contrast, the nickel, aluminium, and titanium were largely depleted there. This unique elemental partitioning, as a result, induced the nanoscale disordering within the nanolayer which effectively suppresses the fractures along grain boundaries and enhances the ductility. 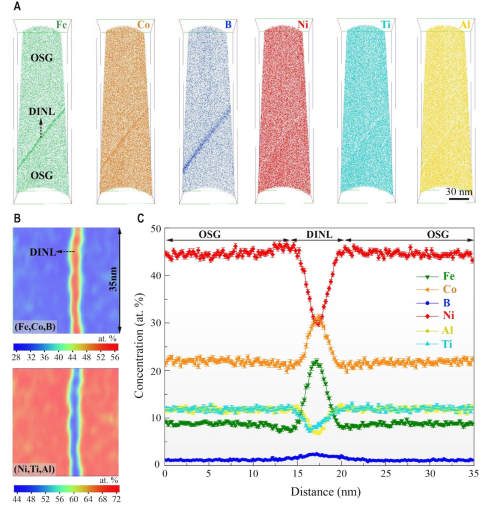 Moreover, when evaluating the thermal response of the alloy, the team found that the increase in grain size was negligible even after 120 hours of annealing at a high temperature of 1050 °C. This surprised the team again because most of the structural materials usually show the rapid growth of grain size at high temperatures, resulting in strength decrease quickly.

The researchers believe that the nanolayer is pivotal in suppressing growth in grain size and maintain its strength at high temperatures. The thermal stability of the disordered nanolayer will render this type of alloy suitable for high-temperature structural applications. 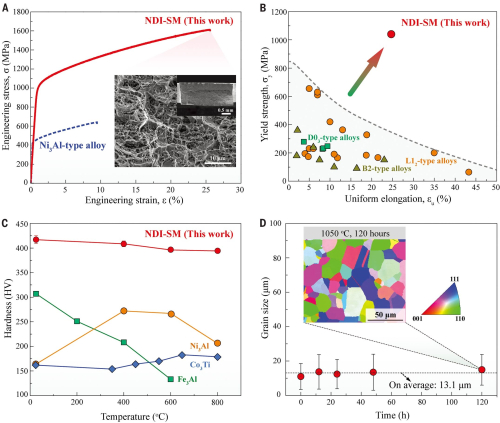 These charts suggest that the alloy (NDI-SM) has achieved a superior strength-ductility synergy at ambient temperature and extraordinary heat resistance at elevated temperatures. Yang et al.

The funding support of the study included CityU, the Hong Kong Research Grant Council, and the National Natural Science Foundation of China.